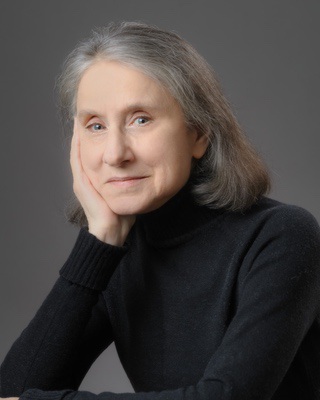 Maryann Corbett spent almost thirty-five years working for the Office of the Revisor of Statutes at the Minnesota Legislature. Her work has appeared widely in journals like 32 Poems, Barrow Street, Ecotone, Rattle, River Styx, Southwest Review, and Subtropics and in anthologies like The Best American Poetry 2018 and Measure for Measure: An Anthology of Poetic Meters. Her third book, Mid Evil, won the 2014 Richard Wilbur Award; she is also a past winner of the Willis Barnstone Translation Prize and a past finalist for the Howard Nemerov Sonnet Award. Her fourth book, Street View, was a finalist for the Able Muse Book Prize and was published in 2017 by Able Muse Press.

for the night teams at the Revisor’s Office


The building lifts the bank of lighted windows
into the darkness.

Approach on any night in spring—late April
into mid-May—
and there it is, hung in the night, reciting
still here, still here.

Lit windows always mean a late shift, working.
Up there, all night,
they work. They make the bills and the amendments
ready for morning.

Think of the weariness of old lighthouses
on the North Shore.
Think of the concentration of the surgeons
in trauma units.

Farfetched, you say? Maybe you balk at mixing
these metaphors?

The law, a tanker lighted into harbor
on a roiled sea?
Sure. Reams of paper hauled back from committee
are a beached vessel,
the wreckage of hours wrangling, the loved projects
lying in fragments—

The law as midnight lowlife, deal gone pear-shaped,
slashed, bleeding?
Up there, they reconstruct the damaged corpus
scalpel-exactly.

Late, very late, they work by the lit windows.
No loud suspense film
lauds them. No documentary explains them.

They are profoundly
ignorable. My one task is to prod you
to think about them.
« Previous