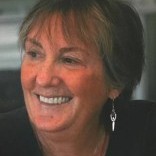 Kathryn Brown is a retired captain with the San Francisco Police Department. She is currently working on a collection of short stories based on her experiences while working in high crime areas of the… Read more »

Slipping out of the bright sun my patrol car creeps slowly towards the end of the alley, where I see the faces of three scruffy looking people seeking refuge on a filthy mattress against the far wall. A sliver of open air running between two tall buildings, the alley is steeped in shadow and a patternless collection of garbage. Radio signals are blocked by the height of the buildings in alleys like this. If I need help I’ll be on my own.

What am I doing? Rolling down this alley filled with a simmering desperation to prove myself.

I am not who I was. A strange fear and shame sit high on my shoulders waiting to strangle any thoughts of value or bravery. It has been so easy to lose myself that I have begun to wonder what there was of me to lose.

A few months ago I had responded to a simple complaint about a car blocking someone’s driveway. It was a bogus complaint so that when I drove up to the address I found no car anywhere near the driveway. That’s when a sixteen-year-old with a .45 caliber revolver walked up behind my patrol car… Read more »