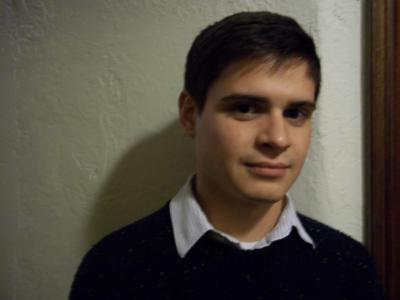 Patrick Milian lives in Seattle, Washington where he is pursuing an MFA in Poetry from the University of Washington. He is also associate editor of the Seattle Review.

The hurt kids growing up like you can expect isn’t the
hungry kind of guts yarned and knotted in blue rope. I’m
hardly qualified to give you an informed account of
how carefully gardened yards yield the most brilliant flowers,
but, having cut gushing yellows and reds from tangled, rough-
hewn kinds of gardenia and yarrow, I’ve learned some about
the horrific cultivation to be gained yearningly from
haphazardly cast grain. Yesterday I saw, woven into an arbor,
little twists of daylilies I thought were weeds
lodged with total dexterity through the most alien-
looking tarantulas of daisies. The new question: why rope
looped and twinged enough decides, then, to weave into itself
and leave the tinge of disaster thoroughly. Your hurt’s
the task of daffodils: the arduous blooming.

“ This poem is one of a series that came out of a number of experiments exploring how sound can be used in poetry. I was toying with the use of consonant clusters as a means of (re)organizing the traditional sonnet form and this piece, inspired by the strange feeling of living near small children for the first time in years, came to be after many failed attempts at trying to write something that sounded more like a poem than a tongue twister. I would like to thank Rich Smith for his encouragement, without which I would have scrapped the project altogether. ”