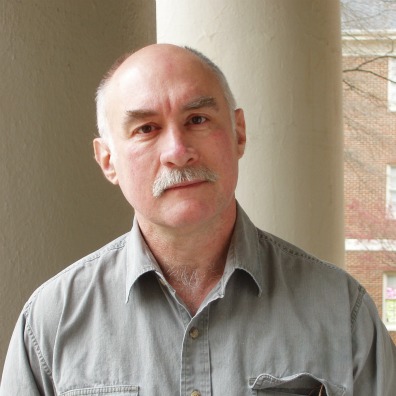 Drunk at ten in the morning, said
the man at the table behind us,
as though it was something unusual,
as though he had never swayed
at the starting gate of an aching new day,
seeing only chalky gray flat
before him, his blood too weighted
to move and tasting the need
to light it up or shut it down.
It’s clear he never thought it was
a good idea to dance in the office
of his ex-wife’s lawyer or to sing
“Blue Moon of Kentucky” on a bus
filled with people going to work
and busy with cell phones, briefcases
and coffee cups. He has forgotten
he could have been me or anyone
thirsty and confused enough
to need the day’s possibilities reduced
to one. Some afternoons I play
hide and seek with my daughter
in an old graveyard or inside
the labyrinth of a used book store,
hoping she will find as I have
a love for quiet places. But I don’t
want her to go for days
as I did speaking to no one
but bored store clerks who wanted me
to shut up and take my vodka
home to its orange juice, the blinds
already pulled on the day.
Yesterday, driving to work after
dropping her at school, I saw
two men I might have been,
one falling in slow motion,
the other bending to help him up,
the pathway treacherous, the day
narrow and endless before them.

“ I have lived in Raleigh, North Carolina for many years. The part of Raleigh where I live is called ‘inside the beltline’ by residents. I call it ‘the part of Raleigh with sidewalks.’ Roughly speaking, it contains downtown, most of the town’s colleges and universities, and, increasingly, most of its affordable housing. Like any such area, this part of town boasts its share of characters. One guy I always used to see I called ‘Cigar’ because when he was doing well he always had a cigar in his mouth and usually was wearing a sports jacket and hat. This poem began one morning when I saw him falling down on the sidewalk, obviously drunk, right after I had dropped my daughter at her preschool. This area has its share of hard drinking vagrants, but I had never seen this guy drunk before. About the same time, I overheard someone speak the first line of the poem, ‘Drunk at ten in the morning,’ and I began thinking about how many such mornings I had in the years before I got sober. And like any parent in recovery—or any parent at all—I hope that my daughter can avoid such excesses. The drunken shenanigans I mention in the poem are not things I did, although dancing and singing ‘Blue Moon of Kentucky’ were often side effects of my drinking. ”