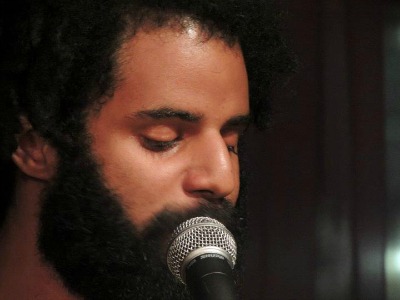 Born in and influenced by the HipHop era, yet at the same time always acknowledging the foundations laid down by fore runners and trail blazers such as Langston Hughes, Amiri Baraka, Gil Scott Heron, The Last Poets, Sonia Sanchez, Nikki Giovanni, Jaki Terry, Saul Williams, Jessica Care Moore, Taalam Acey, E The Poet Emcee, etc… In 2010 Mr. Hughes released a book of original poetry entitled “Slanguage Arts” (The Readers Edition) the follow up to 2007’s Album of the same title which was critically praised as “A deeply profound representation of this generations next and most important radical poetic voice” by Umar Bin Hussin of The Last Poets. And another collection of poems entitled “Griot Glimpses” in 2011. Slangston Hughes attempts to bridge the gap between the legacy paved through the Harlem renaissance and Black Arts Movement with the innovative but yet rebellious spirit of HipHop culture, evoking the eternally emerging essence of the town crier or “street poet.” Slangston’s newest album Ghetto Griot vol 1 (Tubman City Times) released april 2012 is an epic of truth that brings together HipHop Afro Beat and Rhythms with the revolutionary spirit of the black consciousness movement and the ancestral spirit of griot and nomo (speaking words to life) tradition. Slangston is also one of the slam coach’s for the Baltimore City Youth Poetry Team who has competed nationally in Brave New Voices 3 years in a row.

“ The past 3 years have been without a doubt the most trying time of my nearly 30 years on this planet but the shining sun consistently peeking through the clouds has been the youth from BCYPT and The Tubman City Youth Poetry Team that I’ve been blessed to work with these past 3 years… a big heart felt shout out to Nakia Ensence Brown Lemell Powell Teonna Lyric Cole Daniel J Wilson Scooby Tuck Nicole Harrison Allison Olender Armand Jackson Lola Zen Jackson Christian Denoir Su Tin, Shaquille Carbon, Michael Penn II, Taylor Lashay Brooks, Tierra Wallace … and my fellow coaches along the way… Olu Butterfly Woods, Kenneth Michael Wernsdorfer and Patrick Washington (during year one) you guys have made my life worth living at times when I always wasn’t so sure… so to you family I say thank you… from the bottom of my soul, thank you!!!!! ”