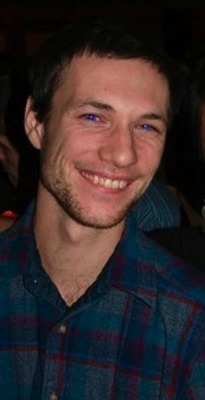 Rusty Kjarvik is an emerging writer who has begun to embark on a career path as a creative writer only within the past year. He currently has one print publication of poetry in The Poetic Pinup Revue in their February 2012 issue. Rusty Kjarvik lives in Calgary, Alberta with his wife, where he writes a blog at www.rkjarvik.blogspot.com and makes a living as a world music percussionist. 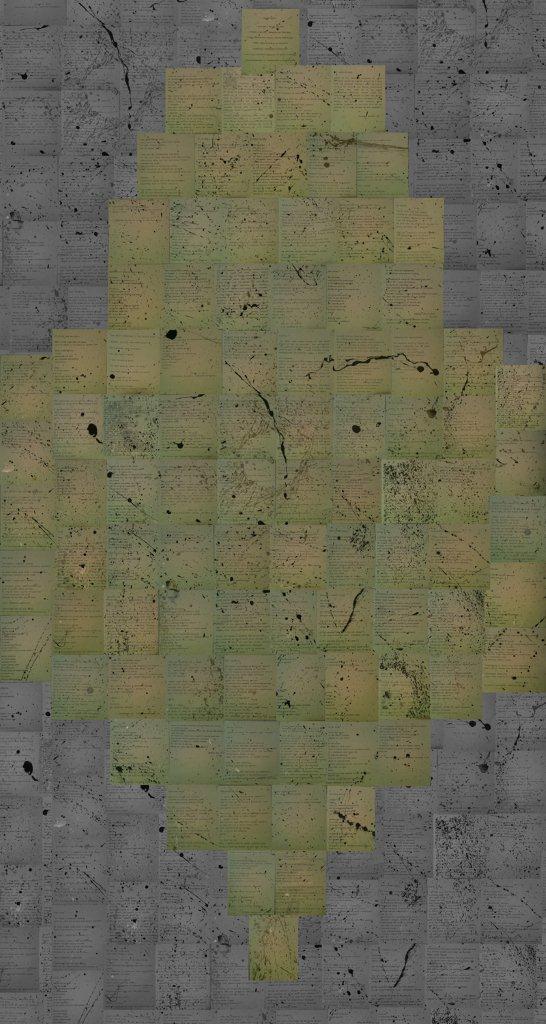 “ By using a spontaneous form of action painting, without touching the brush to the paper at any time, three different shades of paint; gold, white and black, are used to emphasize free form, spontaneous creative expression not only in the written word, but in the space that it occupies. This method of action painting, which withholds all contact with brush and medium, excites notions of letting pure spontaneity occur through the open-ended natural course of creation taking shape out of human hands (in the air).

This representation of the spontaneous action of free form creativity in writing makes the viewer look at the entire page as one unified expression in the creative form of the particular written piece, whereby the empty space defines the writing as much as the words expressed on the page. Those who habitually write freehand, especially free form, improvisational writers, know that the limited size and type of paper (e.g. whether there are lines, creases, folds, graphics, etc.) inevitably divides up the rhythm of open-ended spontaneous expression.

By utilizing circular objects, such as plastic compact disc panels and other circular objects, I have used a method of action painting where I flit a paint-covered brush repeatedly to introduce a dense splatter effect over a circular form in order to regard the fact that all writing is inevitably formed by the shape of the letter, word and sound through which its expression carries. Another method of action painting brought me to form sizeable globs of paint in shape of an oval, especially at the end of a tail or alone, confirming the universal truth that with free form, spontaneous movement, all form inevitably assumes a circularity (or cyclicality), as represented in the oval, sphere and all other circular formations found in nature that are central to the creative essence of form.

The center of the artwork details a line with a globular oval end protruding into a circular form. This marriage of two different methods of action painting, spraying over a concretized foreign object and allowing natural shapes to occur, is the central image in the piece, which glorifies human intent metaphorically through many complementary symbols, as in the sperm and the egg among others. The globular oval and thick line formed near to the core image represents a leading expression, passing away from the center’s concretized circular form, from which the rest of the paint devolves as miniscule spatial occupations on the page. The rest of the action painting signifies the importance of relatively negligible marks defining a whole expression of greater density and presence.

The process of creating this piece: freehand spontaneous writing on notepads, transcribing writings onto a computer, editing form of writing into conventional poetics, typing out each piece onto self-prepared craft paper, stitching together each page into a wall mural (or spatial literature), action painting, re-configuring the entire spatial layout page-by-page, photographing and scanning each page, designing the end artwork via computer software. ”

Rising crayons begin to burn their wax; the sun can afford shade and we persist within the intestinal blockade of the urban. We must hike in this time off or the Red River will burn sapphire loneliness. Convincing her to cry gives oceans a reason to rise. This infinite consequence, he and I—he her, he and I.

Dragonflies proceed. Deerticks retreat. Morning evolves. Murmur fables around our ears. Vultures, threatened by the humid viridian moss, try pollinating the fog; sun’s an unspoken emporium and where all this rising goes, our shrunken eviscerations become a hand on the nearest shoulder.

Bashō: “Fifth-month rain./ Poems pasted to the wall, peeled off,/ leave traces.” The voice has an adhesive side, peeled back by light and stuck to anyone who will listen. I threw a chair so it would talk to me. Issa: “The evening clears./ On the pale sky/ row on row of autumn mountains.” Dust circled the room, pulled me to the floors as I coughed. The wall would learn my language one mote at a time, the violence of stillness on my lips.

The window burned/ in the corner. Sunset/ script onto eggshell paint.