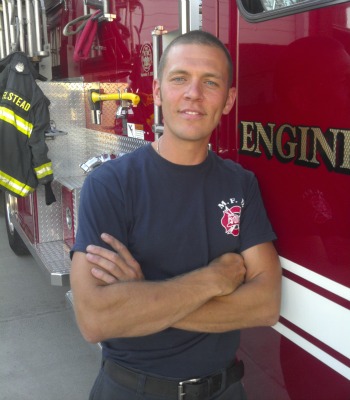 Jonathan Travelstead served in the Air Force National Guard for six years as a firefighter and currently works as a fulltime firefighter for the city of Murphysboro as he is finishing his MFA at Southern Illinois University. When not on duty, he backpacks twice each year in Central America and Europe, and works on an old dirtbike he hopes will get him to Peru in December.

No thwock of ignition, no whump of heat sails by
as I squeal to a stop the cardboard box my sleeping brain
makes into a fire engine.

Strobes churn the dark. My ego radios for help
as I rush pell-mell with a dull axe
the halligan’s crow-billed
steel fork and spike
towards the crumpled sedan melting
in front of me.

What a moment before burned like a wad of paper
is now a dogwood flower that’s sprouted pink,
sudden and enormous from the broken yellow line.

Petals swollen,
salmon glow flickering against a body trembling inside.
Always the wrong tools,
my set of irons clatter to the ground, my hide-thick gloves.

Black fingers trace clefts until the folds part
and unfurl to asphalt,
allow entrance to the cinder-black body inside.

Taking the blisters of her lips in mine,
I knew her.

Because no one is coming
I plunge the crackle and rind of her chest,
snapping ribs like kindling
until the cavities of her heart
I cup with both hands

as if with the right touch the pump will start again,
her eyes open like I remember,
and this time love me.

“ This poem is the first in which I realized that to make sense of many of my work experiences I must distill only the facts of the scene, then filter them through the surreal. Only then do I feel the narrative begin to reflect the speaker’s illusion of control over his own life, and as a necessary result his powerlessness over anyone else’s. ”