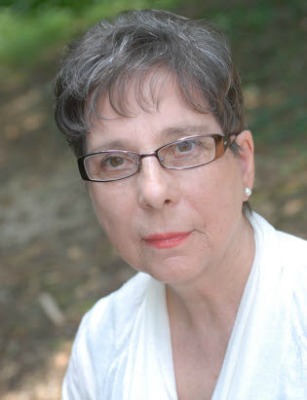 Grace Cavalieri’s newest publications are a chapbook, Gotta Go Now, 2012 and a novella in verse, Millie’s Sunshine Tiki Villas, 2011 (both by Casa Menendez.) She’s the author of 16 books and chapbooks of poetry; and 28 produced plays, short-form and full-length. Her recent books Millie’s Tiki Villas, Sounds Like Something I Would Say and Anna Nicole: Poems are on Kindle’s free library Grace founded, and still produces “The Poet and the Poem” on public radio, celebrating 35 years on-air in 2012. The program is recorded at the Library of Congress and transmitted nationally via NPR and Pacifica. Her play “Anna Nicole: Blonde Glory” opened in NYC, 2011. Her play “Quilting the Sun” opened in S.C. 2011. She holds the Allen Ginsberg Poetry Award, A Paterson Poetry Prize, the Pen syndicated Fiction Award, the Bordighera Poetry Award plus others.

But it’s just a portrait,
you say,
a baptism of fire.

How could I find myself in this?
Birds flying away
through a tangle of trees?

Hellfire, I think,
is a sea of fire over your mantel.
Framed scintillation.

To find the meaning, you say,
throw yourself
into its meaning.

I step backward.
An inferno, I think,
is not my idea of beauty.

Who
does not deserve better
than this, I answer.

This is just a picture,
you argue, of colors,
luminosity, incandescence,

No, Love
is not a scorching
even if it lights up the sky.

I tie up the cool
ends of my heart into
a ribbon of safety.

After all,
yours is just a portrait
of fake fire.

“ I realize everyone sidesteps courage by saying, 'I have a friend who…' but in this case it is absolutely and painfully true. I have a friend who was recently told by her husband that he wants out of a long marriage. However, that was just the beginning of a series of long distorted overtures which sounded like 'come closer, stay away, we can reconcile, come into my psychosis.' I wrote PORTRAIT about the folie a deux where one person’s madness invites another inside, and although tempted, the viewer of the 'portrait' 'scene' 'event' 'marriage' eventually chooses to save herself, by seeing through her own eyes, her own interpretation, her own clear view of destruction. Fire was the apt metaphor because it is beautiful and flashes with color, even while it burns. ”