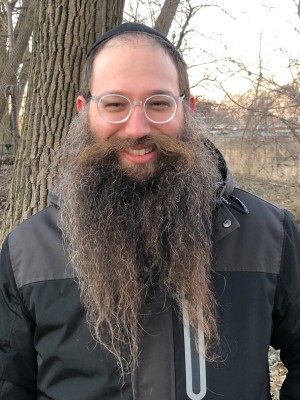 Yehoshua November is the author of two poetry collections, God’s Optimism (a finalist for the Los Angeles Times Book Prize) and Two Worlds Exist (a finalist for the National Jewish Book Award and the Paterson Poetry Prize). His work has been featured in The New York Times Magazine, Harvard Divinity Bulletin, The Sun, Virginia Quarterly Review, and on National Public Radio and On Being’s Poetry Unbound podcast program.

1. It was when she pulled out her chair after entering midway through our fourth class— muttering what at first sounded like a lie about struggling to find parking— that I realized my Vietnamese student had only one hand. She wrote a short memoir piece on her high school music teacher’s prediction her prosthetic could not summon the pressure she’d need to squeeze out the staccato notes at the upcoming violin recital. 2. (Strangely, often, teachers’ most hurtful comments are also untrue). 3. At the dining room table, I lost my temper after one of my sons misread a word in a Hebrew prayer we’d practiced a hundred times. I’m a stupid person. What do you want from me? 4. When you pray, do not make your prayers routine but an entreaty of mercy and a supplication before the Almighty, Rabbi Shimon would say. 5. All semester, the sorority sister tossed her dark hair, checked her phone, whispered to her friends in light tones. In her final portfolio, a poem about her attempt, in ninth grade, to OD on aspirin after learning the upperclassman she’d given herself to had been playing First Senior to Sleep with a Freshman. 6. In one of my earliest memories, I am a boy whose father has brought him to the town rabbi for thinking lowly of himself after earning a B- on an exam on the book of Genesis. In his basement office, the large rabbi leans toward me: Don’t compare yourself to your classmates. 7. A professor takes a sip of coffee from his earthenware mug, writes “Fascinating” in the margins of a student paper without reading a word. 8. In his notebook, on the page where he wrote about finding his father’s "ugly blue body," my student's script turns very large but barely legible. 9. It’s said that at age six— a slow learner with prodigious stepbrothers and a famous rabbinic father— Maimonides ran away from home, opened the Ark of the local synagogue, pleaded, saw sparks, and awoke with a photographic memory. 10. On my commute to teach courses in Brooklyn and New Brunswick, I listen to the recorded lectures of a rabbi who recently passed away. Between teaching the technical verses on the Tabernacle’s construction, he offers impersonations of the yeshiva cook, Montreal, circa 1960. Between Maimonides’s complex formulas for predicting the appearance of the new moon, stories of his father’s rabbinate in Newark. In one, a drunken former S.S. officer follows the spiritual leader down Union Street, begging for Divine exoneration. “I will not forgive you,” the rabbi answers, each time. Losing your place, correcting a mistake you’d made in the previous recording, you reminded us God never expected perfection. 11. Once, I returned a failing paper to a front tackle, who stood up to his full 6’7” height, rustled the pages, and bolted out of the room in his scarlet sweatsuit. A moment later he returned to grab his backpack, flip the light switch, and disappear again. Winter’s muted daylight entered through the windows along the back wall of the remedial classroom. In the semi darkness, seventeen faces gazed up at me.
Listen:
« Previous