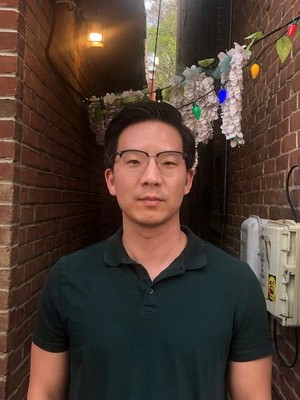 David Kim has an MFA from the University of Maryland at College Park. This is his first publication.

The small Asian couple sat at the edge of the Reflecting Pool, staring across the black water at the Lincoln Memorial. Index cards lay scattered between them, their corners worn and fraying. They had spent the past hour reciting answers they’d concocted months ago, so that she could practice one last time saying the words in English. He didn’t need to practice his English. He was already a citizen. But they were finished with that now. The sun had dropped out of view, and the light was fading. Behind them were the jovial voices of tourists and locals taking in a piece of American history on a warm April evening.

“It is getting late,” Bora said in English. “Soon will be night,” she said, enunciating each syllable slowly.

“Are you just practicing?” Michael asked in Korean. “Or are you actually saying it’s late?”

“Both,” Bora said and switched back. “We should get going soon. We don’t know exactly when they’ll call us in tomorrow, but I want to make sure we’re there early. It would be tragic if after all this waiting we’re late and tired.”

“I just want to make sure we’re fresh,” Bora said and adjusted her cheap wedding ring, which had slid down her finger, “like we’re a couple eager to start our new lives.”

Bora reached for the index cards. “Should we go over the questions again?”

Michael placed his hand atop hers, and she took her hand back.

“We’ve gone over them enough.” Michael turned and watched a man around his age kneel to one knee and tie his child’s shoelaces. Now that the sun had set, people were going back to their homes or they were making their way to the monument, which glowed in the twilight.

“After tomorrow, you won’t have to think about any of this again. Isn’t that nice?”

“I’m just concerned they won’t understand what I’m trying to say,” Bora said. “If only I was allowed to speak Korean. That would make things easier.”

Michael nodded. The man stood up and tousled his son’s hair. They began walking towards the elms on the other side. A woman with a stroller smiled, and soon the three of them were walking together, headed down the dark tree-shaded path that led to the street.

“I’m thinking about what Mrs. Kang said,” Bora continued. “About how they’ll ask questions tomorrow that we won’t expect no matter how much we’ve prepared. Everything’s different now. They’re looking to catch us in a lie, so we have to be careful. Mrs. Kang says a lot of people have failed their green card interviews lately.”

“I know you were,” Bora said, looking at him. “I’m just worried about it.”

“I’m just tired of talking about it.”

“What do you want to talk about then?” Bora said. “It’s tomorrow.”

“Listen,” Michael said, looking at her. “I’m not even sure if I’m going to show up.”

“What?” Bora laughed. She grabbed a few index cards and began shuffling them in her hands. “You’re not sure you’re going to show up? What does that mean?”

“It means that I’m not sure,” Michael said.

“I don’t understand. Why wouldn’t you be sure?”

“Can you explain?” Bora asked and laughed again.

“It’s just that if I go tomorrow, and everything goes well,” he finally said, “there won’t be any reason for us to see each other again. You’ll have gotten what you wanted, and you’ll have no use for me.”

“That’s not true,” Bora said. She tapped the cards against the concrete and set them down. “We can still see each other. I’ll be busy of course. As soon as I get my green card, I want to start working, but I’ll have time. We’ve become friends through this.”

“Joon-ho,” Bora said. “Can you please stop saying that? The interview is tomorrow morning, and we’ve spent all this time preparing. You can’t come to me on the last day and say that you suddenly aren’t sure. It’s too late. We’ll see each other again. I promise.”

“Occasionally seeing each other,” Michael said, and for a moment, his eyes seemed to fill with light. “I’ve thought about it a lot, and I want more than that.”

Bora sat back, shoulders slumped, hands flat against the concrete. She watched a plane move slowly across the dark sky. The roar of its engine halted several conversations around them, and everyone watched the plane, which seemed low in the air, until it disappeared over the buildings.

“We’ve been through this.”

“You paid me to marry you,” Michael said, “which I did. But you haven’t paid me yet to show up to the interview.” He took his eyes off Bora. Though it was dark, Michael saw that he’d angered her. “There’s a difference between the two,” he said.

“The deal was,” Bora said, “that I would pay you the rest after I got my green card.”

“What’s the problem then?”

“Nothing,” Michael said. “What is it about me that you don’t think is good enough?"

Bora laughed. “I really don’t want to get into that right now.”

“Is it because of the debt? Because I work at a liquor store?”

“Joon-ho, please,” Bora said and sat up, folding her legs beneath her.

She grabbed another index card and ran its edge across her palm lengthwise. The card held the only question that Michael had had a strong opinion about. Michael had wanted to say they’d met at church, and even though it was all make-believe, she’d sensed then that a difficult road awaited her. She could have asked for someone else but hadn’t.

“You know, I wasn’t always like this,” Michael said. “I went to college.”

“I was a popular kid. I had lots of girlfriends.”

“That’s why you should take the money,” Bora said. “I know it isn’t going to fix everything, but it’s progress. You can use it to pay off at least some of your debt, or maybe you can even invest it. You’re not in a bad situation. I’d love to be where you are.”

Michael said nothing. After a minute, he scooted forward and looked at the water. It was too dark to make out any of his features. Only a black shape stared back at him.

“You know, I would never judge you for the past,” Michael said.

Bora crumpled the index card into a ball. “What do you mean?”

“A lot of other people might, but I would never do that. I know I’m bringing it up right now, but I don’t care what you did. I understand why you had to.”

Bora unfolded the index card and pressed it against her knee. “Okay.”

“I would never judge you for it, and we could have a nice, quiet life somewhere. I would get my life back together. I’m sure of it. I can’t do that with other women because they expect me to have it all figured out by now, but with you, it’d be different. You would give me time, which is what I need. In turn, I could help you figure out how to live in this country.”

“That’s nice of you,” Bora said, “but I’ve already been here for five years.”

“I’m serious.” Michael looked at her. “We would be good for each other.”

“I’m tired of this,” Bora said, tossing the index card onto the concrete. She stood as a group of teenagers rode past on scooters, their lights burning white hot as they headed for the trees. “We had a deal. You can’t go back on it now.”

“You can’t do anything without me, so please sit, and we’ll talk about it.”

“The broker?” Michael said. “She’s an old woman with an illegal business. One phone call, and she goes to jail. Like you said, it’s not a good time for people like her.”

“Think about the money, Joon-ho. It’s worth more than me.”

“I don’t want the money anymore,” Michael said. “You can keep it.”

“I nearly killed myself getting it.”

“Stop saying that,” Bora said. “You know nothing.”

Michael rested his hands on his head. “Nothing?”

“Well, about me, you don’t. And how could you?” Bora said. “I’m not saying your life has been easy. No one’s life is. But you can’t begin to imagine what I’ve been through these past five years.”

“I can imagine. I’ve been in a dark place before.”

“Then I could help you forget,” Michael said. “Tomorrow can be a new day for both of us.”

“I wanted to die, Joon-ho. I tried,” she said and looked out at the water, “to make the best of it. There are all these little tricks you can teach yourself to make the time go by easier. You find joy in small things. Food, for one, will never taste better than it did during that first year, and a hot shower sometimes felt like a religious experience. But that only works for so long. Eventually you have to learn new tricks, but the cruel thing you find out is that the new ones don’t work nearly as well. I just kept telling myself I was doing it for my citizenship, but that doesn’t make the time go by quicker. It just gives it purpose.”

“Were the men mean to you?”

“Sorry,” he said, pinching the bridge of his nose. “It popped into my head.”

“But you still have trouble getting away,” Michael said. “I see it.”

“Are you going to show up tomorrow? Tell me you are.”

“I’m sorry, but I just think I can help you. I may never understand what you’ve been through, but at least I’ll know about it. When you become a part of this country, you’ll have to hide it from everybody, but you won't have to do that with me.”

“I think I would rather hide it from everybody,” Bora said.

“That sounds tiring. Maybe I don’t know much, but I know that.”

Another plane moved across the sky, and they watched it together.

“It’s because you remind me of them,” she said. “I was friends with them, too.”

“When I’m with you, it feels the same. The situation is completely different, of course. I’m paying you, after all, but I feel like I’m back there. Every time I see you I get the same feeling in my body, like I’m just waiting for it to be over.”

“I wouldn’t do that,” Bora said flatly. “I don’t want to hurt you or anybody else.”

“I’m sorry, Joon-ho. You have to understand. I really am—”

Michael stood to his feet. He gathered the index cards into a pile and slipped them into his pocket. The Lincoln Memorial was lit up, and its reflection stretched grotesquely across the black water. He turned and saw all the people sitting with their families. A few were eating out of takeout boxes. He watched Bora set her sandals to the side and lower her feet into the water. He thought of her in the shower.

“I’ll take another look at the index cards,” Michael said, “before the interview.”

“Yes,” he said and smiled. “But it would be nice if I could get the money tomorrow.”

“Of course,” Bora said and looked at the water.

She made out her eyes and her nose and her mouth. She could see everything.

“ When I began working on this story, I was certain of only one thing. I wanted to dramatize a situation in which one character was afraid of tomorrow, while the other was excited by it. Whenever I got stuck or lost, I returned to that idea. For a few months, it was my guiding light. ”