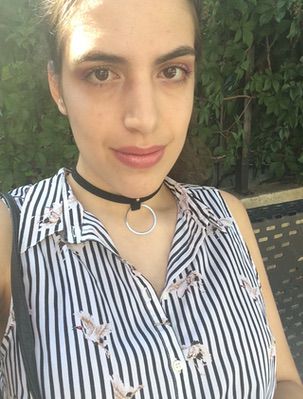 Avra Margariti is a Social Work undergrad from Greece. She enjoys storytelling in all its forms and writes about diverse identities and experiences. Her work has appeared or is forthcoming in SmokeLong Quarterly, The Forge Literary, Longleaf Review, The Journal of Compressed Creative Arts, and other venues. Avra won the 2019 Bacopa Literary Review prize for fiction. You can find her on twitter @avramargariti.

A ghost sits at the kitchen table, buttering toast. He wavers, semi-transparent. Not wanting to spook him further, I leave.

How many ghosts can fit in a house before it becomes a cemetery?

On my way to the dog shelter, I buy a deli sandwich that tastes like sawdust. Every day, I walk a different dog around the block. It gets me out of the house. Gives the ghosts some privacy, too.

“New arrival,” says the shelter lady. “Poor thing. Nobody will ever want her . . . too damaged.”

The dog in question is dark-furred, buster-collared. A bony mixed breed. The adoption fee, less than the price of my sawdust breakfast. So I pay it.

They say depression is a black dog following you around. This dog trembles so much, she can’t walk. I want to make the ones who hurt her pay, but admitting this would mean more therapy sessions. I carry the dog in my arms. The shelter lady offers me a cardboard box, but I have enough of those, unopened back at the house.

“This is your new home,” I say in the entryway.

It’s been a while since I had company not made of ether. Months ago, the owner warned me about the “houseguests.” They’re harmless, she’d said, a small nuisance. You won’t find cheaper rent. I’d been kicked out of my assisted-living apartment, so I thought, I can handle the ghosts. What’s some extra misery?

When I return from the pet store hauling bags of dry food, a little girl-spirit is scratching the dog’s pink belly.

“Don’t stop on my account,” I say, but she’s already puffed out of sight.

I bathe the dog thoroughly, although I haven’t washed my hair in days. Stitches peek beneath scraggly fur. She reminds me of myself, the first ghost I ever saw in the mirror.

Later, she sleeps under my bedcovers. Won’t stop quivering. A rescue dog is a lot like a house ghost: skittish, whimpering, terrified of people.

What would it take to nurse her back to health? To guide my poor houseguests into the light?

I, too, am haunted by humans.

“ My story explores various hauntings: house-ghosts caught in limbo, other people, and mental illness, to name a few. Depression in particular is often called ‘the black dog.’ Interestingly, anecdotal evidence from animal shelter workers suggests that dogs with darker coats are less likely to be adopted. This is also known as ‘black dog syndrome.’

Another concept my story explores: how to make peace with one’s ghosts. ”