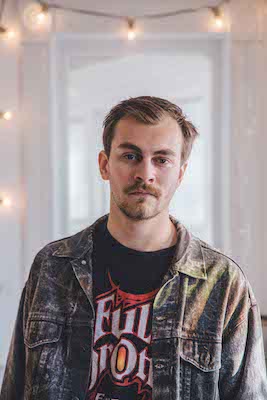 Luke Muyskens lives in Minneapolis, Minnesota. His fiction has appeared most recently in Arts & Letters, New Madrid, Emrys, Hopkins Review, and Superstition Review. His poetry has appeared most recently in CutBank, New American Writing, and Howling Up to the Sky: The Opioid Epidemic, an anthology from Pact Press. He earned an MFA in fiction from Queen’s University of Charlotte in 2016 and was named a Tin House Scholar for the 2018 Summer Workshop. His interests include but are not limited to Gosha Rubchinskiy.

From where I sat on the porch, I could see across the yard into the enclosure where RJ kept his birds. He had hawks, mostly, and a few falcons, and one Mexican eagle. Where RJ sat, he could see only me and the television, playing a movie in which a girl waded through a swamp with a Maglite.

“I’m going to buy liquor with the money,” I said.

He turned from the screen with a face that seemed badly attached to his skull. I always thought RJ’s expressions seemed laggy or mismatched.

“Isn’t there a giant salamander in this movie?” RJ asked. His voice was high, like a boy’s, though he was almost twenty. He took a pill and chewed it. I turned to see what was happening onscreen: the girl was whispering into a phone.

“So, if you’ve got any liquor, you could give that to me instead of money.”

“Listen, Mick. You didn’t bring any bacon. The big nasty one likes bacon.”

“I couldn’t rack any this week. The store had an extra guard posted. Besides, I thought the eagle liked pork.”

I located the eagle in the huge aviary, which was once a wire corncrib with a tin roof. The bird was huge, bigger than the mutts sniffing around the container. I suspected the eagle’s white neck was meant to be whiter and its golden beak sharper, but still, it could’ve killed me.

RJ had his television and fridge hooked up on the porch so he could watch his birds in comfort. I don’t pretend to know the arrangement he had with the owner of the small country house, or how he came to care for the birds. It didn’t matter at the time.

“You ever sell these birds?”

“Okay. Price tags still on, meat comes to sixty-one. I’ll give you the haul for thirty.”

“Peel off the sale stickers?”

RJ stood and turned off the movie. He was wearing a windbreaker with no shirt beneath and stood over me in a manner that could’ve been interpreted as threatening or exhausted. I imagined his pockets full of money and wondered what it would take to jack him—I made that calculation with most everyone.

“Then you got bad brains, Mick.”

I felt for the plastic bag beside me and lifted it onto my lap, displaying the meat in what I hoped was an appetizing way. The pork loin and hot dogs gleamed.

“You should hold Eva,” RJ said, breaking into a grin. He turned to watch the birds pick through the dirty floor of their cage.

RJ nodded. I couldn’t see her talons from the porch, but I supposed they were long and black. RJ pulled a bottle of tequila from the fridge. He found a large leather glove in a bin.

“I thought you didn’t have any liquor. Can I have a drink?”

Sipping from the bottle, RJ smiled. He put the bottle back in the fridge. I felt like he was thumbing my eyes out. I needed to get tanked right then and he knew it. I always carried a lockback and felt like using it to kill him.

“I’ll give you forty for the meat if you hold Eva.”

“Thirty-five for a smaller one. A hawk.”

“You can hold a stick if you’re scared.” He motioned to a plank of wood on the floor.

Before walking to the aviary, RJ took off his jacket. I knew he did this to show me his back, tattooed with the image of a roulette wheel, its ball forever inked on zero. He thought he was the luckiest motherfucker around, and in many ways, he was. I’d seen RJ take a wine bottle to the temple four or five times without losing consciousness, and he once drove a trailer home into the river and lived. I assumed his acquisition of the birds involved some degree of luck.

This far south in Texas, we felt underneath the world, like we spun less. The sky was too far away. I live in New Mexico now, but a part of me will always be jammed down there like a chock stone. I watched RJ walk toward the cage. Beyond him were the steel wool brambles of the bush, and beyond that, Matagorda Island and the simmering plane of the Gulf.

RJ coaxed a hawk down from its perch. As walked back to me, I could see the bird’s talons were drawing blood from his forearm.

“Meet Farrah. Farrah, Mick.” I recognized the bird as a striker, which I saw often on telephone posts along the interstate. Its eyes were red and wilding.

“What does she eat?”

I found this an odd thing for RJ to say, considering he was Mexican. I thought of the tequila. I squeezed my eyes shut until I felt dizzy. I held my breath, trying to make myself feel drunk, but I only felt sick.

I sliced open the package and handed RJ a raw hot dog, which he offered to Farrah. She tossed it down without biting or chewing. I put the glove on.

A woman appeared in the door of the porch. She looked strong, but not in a tough way, and was slicing jicama into a plastic bag. I knew she was sleeping with RJ, though she was considerably older. I waved and RJ ignored her. The bird appeared agitated by her presence. Its feathers grew rough and it shifted from one leg to the other.

“Y’know how they feed?” the woman asked me. “They see something move in the brambles and shoot right in, through the branches and all, hitting their prey out of nowhere. Half of ‘em break their chest bones doing so, but they eat.”

I picked up the piece of wood with my left hand and held out my right inside the glove. Though I didn’t yet have a reason to kill Farrah, the moment felt like an execution.

Before handing me the bird, I caught a look from RJ. His eyes, usually dull, had a mineral glint, like he was coked up. I thought he was going to laugh, but he didn’t.

Instead of hopping from RJ’s arm to mine, the hawk opened her wings. I saw the checkered plumage of her chest. She lifted into the air. A storm of feathers and wind and claws. I felt something puncture the skin on my collarbone.

I struck her out of the air with the piece of wood. She was dead right away, but I continued bludgeoning her until I was sure.

Before I caught my breath, the woman from the door was pressing a damp rag to my shoulder, soaking up blood. The sweet smell of tequila rose from the rag. I felt the sting of alcohol in my cuts. The woman smiled at me, then went back inside.

RJ was gone. I looked around and saw him carrying the body of the hawk toward the aviary. I sucked tequila from the rag, its fumes rising into my sinuses.

The liquor felt like taking a bath at home after ten years in the hole.

I watched RJ throw Farrah into the enclosure. After a moment of hesitation, the other birds came down and began picking from her body. Except for the eagle—the eagle remained on its perch. It watched RJ walk back to the house and hand me forty dollars.

If he didn’t know I’d kill the hawk, he at least wanted me to. My wish to kill RJ was gone after that. Instead, I thought of how he would eventually die in a car wreck, and how there would be no burial. RJ, like me, would be thrown back into the cage. There would be no ceremony or revenge for us. Scavengers, we were too far south, too near the border, too dry for too long.