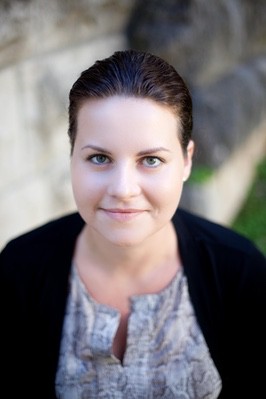 Lana Spendl’s chapbook of short fiction, We Cradled Each Other in the Air, was published in 2017 by Blue Lyra Press. Her short stories, essays, and poetry have appeared or are forthcoming in The Cortland Review, Hobart, The Greensboro Review, Notre Dame Review, Lunch Ticket, Cider Press Review, Front Porch, Hawaii Pacific Review, Watershed Review, Bayou Magazine, Zone 3, and other journals. Originally from Bosnia, Lana is currently working on a collection of stories that take place in Southeast Europe.

Berina sat on the black and white tile in her parents’ bathroom on the second floor. The bathroom, a safe space, smelled of soaps and fresh air. Above the toilet, a window had been left open. Outside, trees surrounded the house—shredded trees, as if insect-infested—and beyond it all lay empty beach. If she concentrated hard, she could hear waves over the pebbled shore.

Everyone had gone to the movies in town, and the afternoon stretched before her like unfolding limbs. She was twelve, and her parents and sisters had started leaving her alone in the house with the door locked tight. She liked sitting on the tile here, even when the house was empty, because peace rested in the walls and old sink. No one entered this space during daylight hours—everyone used the small bathroom on the ground floor—and she spent hours here, against the background of voices downstairs, touching and smelling bottles and powders. She particularly liked to sit on the tile as the day came to a close and darkness seeped into air, making it harder and harder to read the writing on bottles.

Now, as she played with the hem of her skirt, a car moved over the gravel path leading up to the house. The engine shut off. Berina let her skirt drop to her thigh. She focused her eyes on the empty space before her, straining to hear. But not a sound. For a moment, she wondered if the waves, the waves beyond the trees, had with their susurrations and foam and rolling crashes created the sound of an engine. But then a door slammed and Berina jumped.

Pressing palms to the tile, she pushed herself up, and walked to the window to lean and look out. From this side of the house, she only saw part of the gravel driveway and the trees that bordered it. But no car. The car was behind the house. Was it her parents’ car? But her parents’ car was loud.

She exited the bathroom and sneaked round the walls of her parents’ bedroom—it felt too bold to cut across the center of the room—and she descended the stairs outside with a hand on the railing. Halfway down, she heard a fist pound on the door and stopped in her tracks. Her eyes fell on the deadbolt. It looked so small, this bit of metal holding the entire door back.

Was it a stranger? A man? And her mind swung to that day in the kitchen, when her mother and sisters had told her over coffee to stay away from men, to not be alone with them, and she had looked from the one to the other with wide-open eyes, wondering why. But they were silent birds with sharp beaks, and she felt herself dumb suddenly. Their knowledge sat like an amulet in their chests, and she waited, mute, scared, defective in her lack of knowing. And her aunt had said things too, and Berina had lain in bed later on her side, thinking of the men she knew with their great big hands and expressive eyes, and she wondered what dark spirits lurked inside them. But she had never found out. She had never found out and now it was too late. Fear overtook her, and she thought if only she could go back in time to that kitchen day and ask.

Her father’s name. She pressed her side to the railing and gripped the wood with both hands for stability. Then, inhaling courage as if she were about to plunge underwater, she descended the steps, crossed the foyer, and stood on tiptoe to look through the peephole.

A man in sunglasses stood outside, his forehead stretched wide by the lens. His hands pressed against the door on either side of the peephole as if he were about to push against the house. Spooked, Berina stepped down. Then she rose to look again.

With his whole body, the man sighed. He took a step back, looked around. He seemed distressed, exasperated, as if he needed to do something, as if he needed something to punch. He covered his face with both hands and then ran his hands up his hair and scratched the back of his head with his fingers like claws.

Berina stared with eyes open wide. Her mother, in an anxious urge to make things flourish, had stood two potted trees by the entrance to the house. They now rose toward the sky like arthritic limbs. The man, breathing hard, walked to one and unzipped his pants. Then, to Berina’s astonishment, he pulled his penis out and released a stream of urine into the pot. He walked to the other tree, member in hand, dripped some urine on it, and shook himself dry.

Berina, with everything inside, focused on trying to see the organ more clearly, but the lens made it small and blurred. She had never seen a penis before. Except for that one time, but that time didn’t count. Once, a few years back, she had been playing with her boy cousin on the living room rug. When he spilled juice over his shirt and pants, Berina rushed him to the bathroom and told him they would play mother and child. She turned her head to check and check that the adults were not returning from the garden outside. And she stripped the boy of his pants and washed his member with her hands under lukewarm water. She patted him dry with the hand towel. And he trusted her like a mom.

But this man was different. This man was all jaw muscles and fight. Goosebumps stood on her arms. He zipped himself up with an almost-hop and strode to his car. Was he leaving? Berina’s insides wanted to follow—if felt as if all life, all force, all charge, was leaving with him—and she let out a soft sound. But instead of sitting inside the car, the man placed a knee on the driver’s seat and reached his hand to the glove compartment on the other side. Stepping back out, he walked to the door of the house with pen and pad in hand, scribbling something. He dipped at the door to lay the note down and then spat upon the doorstep. Only then did he return to the car and back out. Minutes later, the engine hushed.

Berina, left alone, was suddenly aware of the silence. It felt emptier, more all-encompassing, than the silence before the man showed up. And inside her chest a hardness lodged. It was as if her whole chest were a large hand gripping at something with fingers and knuckles, unable to relax. But her mind was oddly calm. To her left stood a coatrack and above it hung a clock. The objects were foreign and empty to her, as if she were seeing them for the first time.

In this stillness, in this moment where nothing existed but this house and the silence outside it, she wondered what the man had written. Her eyes fell to the deadbolt. She had been told again and again not to unlock the door when they were gone—their voices now reached her faint across hills and mountains—but the warning sounds were small, high-pitched, easily ignored. In this silence, everything felt all right. She turned the deadbolt.

Outside the sky opened up with unfurling clouds. Below it, the driveway sat. She crouched to pick up the note and turned it around to face her. It only said, “Be a fucking man for once.” A muscle twitched under her eye at the obscene word, but the twitch was a habit twitch, a childhood twitch, nothing more. The word did not actually strike her. She felt faint discomfort at the hardness that might come at her father from this man, though, at the fight. It all felt unpleasant.

Under her thumb where she held the note she felt moisture, and on instinct, she let the paper go and it twirled to the ground. Then she laughed. She laughed at herself and looked at the trees, at the gravel, at the sky. She felt embarrassed suddenly, but warm, enlivened. The moisture was his urine or his spit—it had come from inside him—and now she had touched it. And this mere sensation made her feel sadness for him. And tenderness. He did not feel scary now.

She picked up the note again to examine it some more, and it occurred to her that she needed to put it back on the doorstep. She frowned. She did not want to put it back. But what would happen if the man followed up with her dad? How distasteful and annoying it all was. And if they came back and saw the note, they would know the man had come while she was inside the house, and they would sit her on the sofa and question her and they would look at each other with serious eyes. And then her sisters, her stupid sisters, would come to her room and sit on the blankets and tell her what she should have done. And she did not want it. She did not want any of it. She wanted this note by her side. It was hers, and the afternoon was hers, and there was no way any of them would understand that, and she just wanted to fold the paper up and hide it in the shoebox in the back of her wardrobe among the dolls she no longer played with whose hair she had dyed red and black.