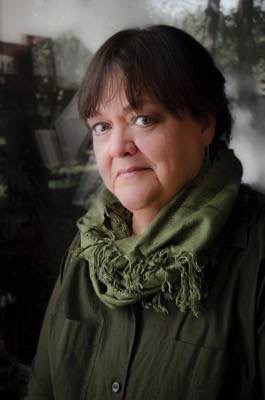 Devon Miller-Duggan has published poems in Rattle, Shenandoah, Margie, Christianity and Literature, and Gargoyle. She teaches Creative Writing at the University of Delaware. Her books include Pinning the Bird to the Wall (2008), Neither Prayer, Nor Bird (2013), and Alphabet Year (2017).

Once a man was sea-gull-bitten in the chin
And afterwards, his chin grew beak-shaped bones.
He waited for the feathers to grow in
So he might fly above the waves and stones.
Feathers grew along his ears and back.
Mothers pulled children close. Crabs attacked.
(He stayed grounded among flotsam, tidal wrack.)

Once a child was bee-stung on the shoulder
And afterwards her bones began to wing—
Ferocious, buzzy, leafy things unfolded.
She flew, though they were small for such a thing.
Her mother, frighted that the wind might catch her
Hired bumble-sitters every day to help her gather.
(Still the bumble-toddler slipped her watchers.)

Once a meteor star-burnt a lonely lady
In the center of the palm of her right hand.
And afterwards, her fingers could be seen from far away,
Brightness bent ‘round earth, as if clawing every land.
She lit what can’t be seen even in day’s light,
Made some rejoice and some recoil in fright.
(But what she touched, she marked as ashes might.)

Once some believed in wonders they could seek
And left their homes to quest for transformations:
Dross to gold, bird to flame, dumb to speak.
Some found the hunt sufficient and returned from their vacations.
Some are not found, are sought or not. We know
They’ve gone where they were led. We hope.
(Or say the need is something we’ll outgrow.)