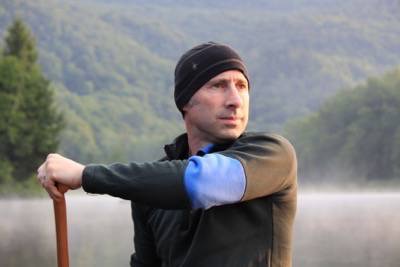 Sean Prentiss is the author of the memoir, Finding Abbey: a Search for Edward Abbey and His Hidden Desert Grave. Prentiss is also the co-editor of The Far Edges of the Fourth Genre: Explorations in Creative Nonfiction, a creative nonfiction craft anthology. He lives on a small lake in northern Vermont with his wife Sarah and serves as an assistant professor at Norwich University. Seanprentiss.com.

All the Varieties of Hunger


As Sean drives home, he thinks about how happy he’ll be back in his mountains.
He also thinks of how difficult his brother Jon has always been, on everyone he loves.
Hard on Sean, hard on Jon’s first wife, hard on this second wife, Annabelle.
Straight hard, Sean mutters, Straight hard.
But Sean has never seen his brother like that—never broken like that.
Sean wonders if it’s somehow this long and exposed Midwestern landscape.


Sean enters the black interstate and thinks to when he was eight and Jon was twelve.
Back to when their father abandoned the family.
As Sean stares at untended roadside fields, he thinks, Gone, straight gone.
After their father left, Jon grew calloused, maybe believing he had to become the father.
Maybe this taught Jon to keep those he loved at a distance.
That way the hurting lessens when they leave you.
As Sean drives, he thinks about how losing a thing can change you.
Sean understands how losing something makes you never want to lose a thing again.


As Sean drives west, toward his far off state, he thinks of Jon last night.
It was the second and final night of Sean’s visit to Jon’s new Midwest town.
Jon said, Let’s get some pizza—his voice light as a spring bird.
Jon said, Annabelle loves pizza (as if he had never thought of anything but Annabelle).
Jon paused and said, She’s had a hard time lately—this move has been hard on her.
Jon went on, You know, the Midwest, the unemployment, all of it.
Jon almost never said these sorts of things.
We’ll get pepperoni. Her favorite.


As Sean and Jon drove to the pizza place, Sean thought of how different Jon seemed this visit.
Gentle—that was the word Sean kept returning to.
Almost as if Jon was trying to fix something that no one even knew was broken yet.
Maybe this feeling of being broken was from the Midwestern distances.
Seeing from here to forever.
Maybe it was the town—the boarded up stores and potholed streets.
Maybe it was the surrounding landscape—the bankrupt farms, the barns collapsing in.
Maybe Jon felt the wind blowing through the next fifty years of his and Annabelle’s life.
Maybe Jon was trying to build a windbreak.


Back at the apartment, Sean and Jon brought the pizza into the kitchen.
Jon took out plates and tore paper towels for napkins.
Jon grabbed three lagers and said, Annabelle loves lagers.
Sean wanted to cradle his brother for this new compassion.
Jon popped opened the beers and said, She should be home soon.
Sean and Jon sat at the table and waited.


Ten minutes later, the apartment door opened and cold winter air thrust in.
Jon met Annabelle in the living room, kissed her on the cheek.
Sean was sure he saw Annabelle smile (absolutely positive).
I made dinner, Jon said, Pizza.
Annabelle said, I need to get out of these clothes.
Jon called toward their bedroom, Pepperoni.


Ten minutes later Annabelle came into the kitchen.
On the table, the pizza still hot, the bottles with dew dripping down their sides.
Jon served everyone a slice, starting with Annabelle.
As Sean took a bite, hungry from waiting, he thought, Annabelle looks straight tired.
Jon, waiting for Annabelle to eat, kept his hands in his lap, as if saying a silent prayer.
Annabelle took a sip from her beer as Jon asked, Any jobs out there?
Jon paused, knowing he had asked the wrong question by a million miles.
Sean wished there was some way he could grab Jon’s words, bring them back.
Annabelle said, Not a one, as she stood from the table.
She took her beer and said, I’m going for a walk.
Jon said, Sean’s leaving in the morning and I’d love to eat as a family.
Sean wondered, How can anything be held together by paper towels and pizza?


After Annabelle left, Jon said, Let’s go to the Riverside Bar.
Jon said, It’s two-for-one night, Old Style drafts.
Jon and Sean walked across this Midwestern town.
No one crowded the streets, the shops closed—not just for tonight.
Each store looked, to Sean, like some physical version of lost hope.
With a biting wind blowing, Jon said, I get so sick of that apartment, sick of this town.
Sean pulled his collar up and thought of these Midwestern landscapes.
Sean buried his hands in his pocket and thought of having no mountains to hide in.
Just rows of corn or soy during summer, dirt come winter.


The next morning, this morning, today, Sean wakes before dawn.
He has eighteen hours of driving to get home.
He dresses quietly, folds the blankets, straightens the sofa.
In the kitchen, Sean opens the fridge, reaches for milk to settle his hung-over stomach.
Sean sees the pizza box, Annabelle must have put it away last night.
After she had returned from her evening walk to the empty house.
Sean opens the box—a single slice gone, his.
Sean closes the box and closes the refrigerator without getting milk.
He grabs his bag and looks around the empty kitchen.
He quietly shuts the front door behind him.
He doesn’t want to disturb Jon and Annabelle—they need sleep.


Sean starts the car and drives away. He thinks of Jon waking this morning, hung-over.
As Sean drives away, he thinks of Jon opening the fridge, seeing the pizza—stale slices.
He thinks of the tense air when Annabelle walks into the kitchen, still unemployed.
Still untethered to this landscape, weary and tired and exhausted from dark dreams.
Sean envisions Jon saying, This town sucks, while meaning nothing stops the wind here.
Or meaning, The clouds take days and days to get from that horizon to here.
Or meaning, Winter lasts forever.
Or meaning, Nothing lasts forever.

“ I rarely write fiction. As an essayist and poet, I often struggle with inventing stories, but a friend told me about a sad night he had with his brother and his brother's wife. And that small story was enough of an entry point into an imagined world. I knew I could not write the essay of that night, since I didn't know the situation or the characters enough. But I did understand the situation. I, too, at that time felt rootless. I, too, was in a landscape that never felt like home. So I used that seed of an idea to craft a fictional account of a man, his wife, and their long stare into the future. ”