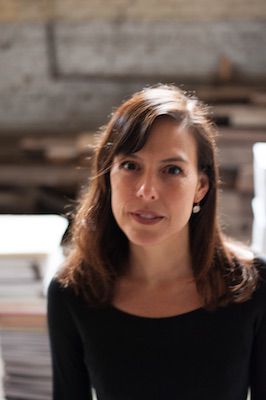 Rachel Jamison Webster is a Professor of Poetry at Northwestern University and author of the full-length collections of poetry, September (Northwestern University Press 2013) and The Endless Unbegun (forthcoming 2015) as well as two chapbooks, The Blue Grotto (2009) and Leaving Phoebe (forthcoming 2015), both from Dancing Girl Press. Her poems and essays have recently appeared in many journals and anthologies, including Poetry, Tin House, The Southern Review, The Paris Review, Narrative and Labor Day: Birth Stories from Today’s Best Women Writers (FSG 2014). You can read more about her at www.racheljamisonwebster.com.

Shortly after I turned thirty, I took a trip to Costa Rica that forced me to reconsider my sense of time. Escape from a daily schedule, immersion in nature, and appearance of my first gray hairs all conspired to create one of those drops into groundlessness that most people I know experience—a kind of newness, or cluelessness, we feel first in the terror of puberty then encounter again and again as we revise our lives.

In my twenties, I had become more comfortable with my own strength, and like many of us, had learned to embrace contradictions. I was a yogi in high heels, a feminist in pressed powder, an organic vegetarian shopping at Target, a seeker pursuing a singular journey even as I deepened my commitments to others. And the reading material I brought on our trip reflected these opposing energies. I had a novel, The Time Traveler’s Wife, a book of feminist theory by Mary Daley called Pure Lust, and the new issue of Vogue.

I opened the magazine first, and quickly consumed glossy spreads of gowns and handbags before circling back to read the articles. Some that I would have skipped over only months ago, I read now with an absorption that my snobbier self chuckled over. One—about a 40 year-old woman who had shaved years off her face (literally) with a series of abrasions and injections totaling just over $10,000—held my interest down to the sidebars.

“Maybe when we get home, I’ll get a chemical peel,” I said to my partner.

“Wow,” he replied, laughing. “They got to you like clockwork.”

The next day, I left the Vogue in the hotel, rented a long board and falteringly taught myself to surf. I was not terribly agile or physically daring, but I managed to stand up on the board, steady myself, and catch a few small waves. And between rounds of exertion and downtime in which I watched picnicking families and clattering palms, I completely lost track of time. Time had flown off its “track,” because I was inhabiting it fully, multi-dimensionally, in a day so good it seemed eternal.

I woke up the next morning tenderized by board bruises and a blistering sunburn, wondering how many years I had added to my complexion. That day we hiked in a nature preserve that had been created thirty years earlier when a cattle rancher and his wife decided to let their land return to its naturally complex habitat. Several different birdsongs fretted the air. Trees thirty feet high were curtained with vines and alive with white-faced monkeys—climbing, foraging and chattering to one another. Ferns pressed through the nooks of trees, lizards scattered among dry leaves, and the path before us coursed with reddish rivulets—leaf-cutting ants, hatted with bright green flakes and purple blossoms, and fully committed to their task. Every creature we saw was busy, alive, making something of time.

That night, I encountered a quote by the writer Starhawk in Mary Daley’s book. While watching a snake shed its skin, she commented, “I came to see time not as a thing, but as a relationship.” Of course! I thought. Time as interaction. Time as give and take. I thought, what if all the people I know—especially the women—could take everything they’d learned about relationships and apply it to their understanding of time? Wouldn’t that give us a deeper, more full-bodied experience with time? Wouldn’t thinking this way help us to gauge when the exchange had become too one-sided? Or when we were being bullied by a schedule, for instance, in a way we wouldn’t allow ourselves to be bullied by another person? When we were giving and receiving in equal measure, delighting and learning as we do in all healthy relationships?

I thought of the healthy relationships I had created and maintained in my life—with my partner, with my friends. They were challenging. They brought me joy. They made me better, ultimately, more in touch with the inside self than the visible self, thus revising the visible self to be wiser, more generous. Was time doing the same thing with me? And, perhaps the better question, was I doing this with my time?

In its public sense, time keeps us in line, it helps us to make it to meetings on time, and to function in sync. The timekeeping of clocks, wristwatches, and iPhones is related to industrialization, and only became widely used during the nineteenth century, when trains had to run on schedule. In its private sense, however, time is almost a spiritual presence, related to the endless coming to fruition and falling away of natural cycles. The Greeks made this distinction, calling sequential, incremental time chronos, and recurrent, sacred time kairos, which is an immeasurable, culminating moment in which everything co-exists, everything happens. In its earliest form, kairos meant weather, connecting it with natural cycles, and Aristotle used it to describe almost the soul of time, suggesting that each rhetorical mode has its kairos, its most soulful moment of connection.

In our culture, however, we tend to note time less often as a presence—as I did on the beach that day—than as an absence. We know it—like a rogue lover—by its departures, by the marks it leaves on the body when it goes. And this, of course, has to do the way we see time working not only on us as individuals, but on the earth. I think of what thirty years has done to the eroding banks of Lake Erie where I grew up, to the prairie around Chicago where I now live. I think of the steel breakwalls, the almost uninterrupted strip malls, the Walmart going up right now smack in the middle of what used to be Green’s Farm. Is there any wonder that we fret about the ravages of time? And do we recognize our role when we expend huge amounts of money using pesticides on our backyards and shoring up our cheekbones and eyelids with chemical creams and Botox?

There are connections here. And time—when we slip through the veneer—is a connective place, where we can commune with mothers, grandmothers, ancestors and other species further back, even where we can know the kairos, the right moment in which to act and speak. We don’t always remember this, but we can inhabit time in a daily way that reconnects us with time in a recurrent and eternal way.

Thinking about this has allowed me to become more astute, and more in tune with my own rhythms and sense of time. I can see now when someone is trying to control my time inappropriately and that has helped me to make smarter decisions in terms of relationships and career. I have only a few years here, but I do have the opportunity to inhabit those years as fully as possible, to experience the eternal—through nature, art, and love—in the everyday.

I’ve seen now what can unfold in a tract of land in which wildness has been respected, which is to say relationship has been respected. Thirty years ago, that wildlife preserve was a clear-cut ranch owned by McDonald’s and now, because of stewards who respect the process of growth and time, it is alive. The ants break up the leaves, they free the pollen that feeds the trees to grow, and every inch of the rainforest is teeming with the interdependence that is the foundation of evolution and the kairos in which everything acts from its being.