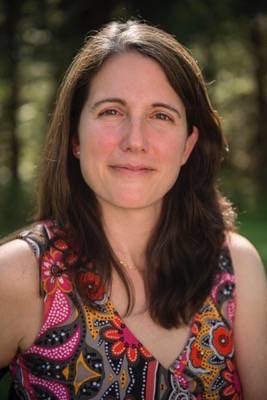 Karen Skolfield’s book Frost in the Low Areas won the 2014 PEN New England Award in poetry and the First Book Award from Zone 3 Press. She received the 2015 Robert H. Winner Memorial Award from the Poetry Society of America and the 2015 Arts & Humanities Award from New England Public Radio, and has received additional fellowships and awards in 2014/2015 from the Massachusetts Cultural Council, Ucross Foundation, Split This Rock, Hedgebrook, Vermont Studio Center, and the Sustainable Arts Foundation. New poems appear in the Academy of American Poets Poem-A-Day, Baltimore Review, Hobart, Indiana Review, MIRAMAR, Pleiades, Southword Journal, and others; she teaches writing to engineers at the University of Massachusetts Amherst, where she earned her Master of Fine Arts. www.karenskolfield.com

All the changing things had reached
their final forms. The lettuce: perfect and buttery.
The housecat: the correct balance of fur and aloof.

The human: if the brain case were any larger,
they’d fall over. Grassblade: every one a whistle.
The world studded by its own unchanging.

The alpha animals rested. With the pinnacle reached,
there was no reason to fight. The male wolves friendly.
The female wolves chose mates by lottery.

What was the difference? One as good as the other.
In the city, speed dating became speedier
with all choices equally compelling.

Children held the hands of the nearest adult
without ever looking up, since any random adult
made the best parent. The adults never minded.

She’d had her own children once—she vaguely
remembered this—and she had loved them,
but she would love whatever child was near her now.

She led the child to her home, or to a home
that might as well be hers, they were so similar.
She made noodles, which all children love.

She imagined that her own children must be
happily eating noodles with another adult
who was doing an equally excellent job of parenting.

have such great lives, she thought.
None of the cowlicks of her youth.
Later they cuddled on the couch, watched reruns.

The little boy fell asleep with his head
in her lap, the best sleeping posture of children.
The evening had been perfect. Tomorrow

would be more of the same. She wondered
at the twitch of muscles across his little face,
what he dreamed of, if he even dreamed at all.

“ I love natural history and science, and evolutionary biology in particular. My kids are wowed by the idea that evolution is continuous, even now when the limit of our lifespans makes everything appear fixed. Some species evolve at an even slower rate: cartilaginous fish such as sharks or rays, and plants such as horsetail have been around so long that we know them as living fossils. What if humans were somehow done with change? What would it look like? Probably not pretty, but at least there are noodles. ”