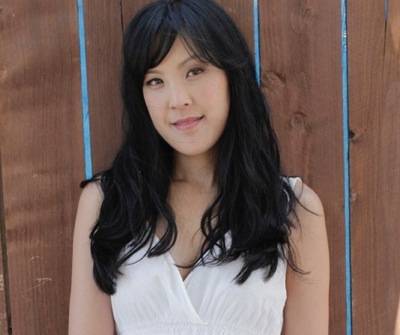 Janice Ko Luo graduated with an MFA in Creative Writing from Antioch University in Los Angeles. She has been a Poetry Editor for the literary and art journal Lunch Ticket. She was selected for a Kundiman fellowship, and her poems have recently appeared in Cha: An Asian Literary Journal and Ricepaper magazine. She divides her time between Los Angeles and New York City.

“Ceci n’est pas une pipe,” Magritte declares of the black floating object. I run around in circles without a head inside that crumbling chicken shack, where Nina Simone can’t stop singing Mississippi Goddam. Francesca Woodman knew the beauty of dilapidated buildings too, naked bodies in ruin. That peeling peach-marbled wallpaper blurring her bare shoulders, providing soft wings. Look for that which is not unclothed but clothed—her identifying marker. That cheap Mary Jane shoe worn by every peasant girl in China. It could have been me in another life carrying an ugly red flag with little yellow stars. Imagine something beating inside that black cloth shoe. It throbs with something else. In the grim subway with dirt linoleum floors, I watch various men grab silver poles and wonder how each of them grabs other things. Then there’s that man released from prison after 20 years for a crime he didn’t commit. Still feeling guilty for no reason, he says, “It’s the beauty not the ugly that hurts you.” In all sordid things, one must find beauty. Magritte found his mother drowned in the river with her thin white dress covering her head. Outside the NEW WORLD FETISH boutique, I drink half a bottle of Bordeaux in a brown paper bag and stare at a pretty nun in a rubber habit. It’s the sordid that will slay you. That box of delicate broken fingers found inside a random basement in the City. At the Medieval stone Cloisters a few stops from Harlem, each saint statue’s hands are missing. “Ceci n’est pas mon coeur,” I say. It just feels like it.

“ I had just moved to New York City, and it seemed like all of the vagaries of life were laid open for me to see every day, particularly on the subway. Juxtaposed onto that and always surrounding me was also art and beauty. Everything felt intensified. ”