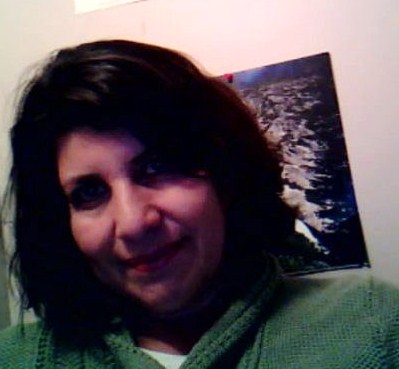 Angela Morales’ recent work has appeared in The Southern Review, The Los Angeles Review, The Southwest Review, River Teeth, and Arts and Letters. She teaches English at Glendale College and is working on an essay collection about growing up in Los Angeles.  She lives with her husband and two children in Pasadena, California. Currently, she does not own a gun.

In the days before we could dial 9-1-1, I would have to speak with the operator and ask, “Can you give me the police department?” and the same woman, each time, would reply, “Certainly. I’ll transfer you now,” and I would be whispering hurry hurry hurry and listening for the thump of footsteps behind me, and I just knew that the operator must be taking her sweet time—fumbling absentmindedly with the cable, twirling in her chair, polishing her nails, and then finally, FINALLY, plugging the cable into the correct slot. A bored-sounding desk cop would then pick up, and I’d need to explain myself. How I despised my voice back then—so rehearsed and robotic. Those words made me ashamed of myself for failing at language, and at other things I couldn’t name. I’d say, in my flat, ugly voice: My dad is beating up my mom.

The words, though true enough, were imprecise. “My” being a descriptor of “dad” never felt altogether accurate, even though, biologically-speaking, he was indeed my father, but he did not belong to me, in the way that some dads belong to their daughters or vice-versa. Another problem existed with the present participle verb “is beating up,” which implied that he was, at that very moment, pummeling her with his fists over and over like Rocky Balboa slugging it out with Spider Rico after Spider had already crouched in surrender and was shielding his face with his gloves. “Beating up,” although accurate to a degree, did not capture the subtlety of the day-after-day—the constant mind-numbing nature of the fight, the petty haranguing, the ebb and flow of the action itself: first escalation, followed by climax, and to use literary terms—a denoument— followed always by eerie silences and another surprise climax, no resolution in sight. Furthermore, the object of the sentence—mom—was the passive vessel upon which the subject (dad) was acting. In addition, the verb “Beating up” implied that mom was further being acted upon and unable to fight back, which to an extent was certainly true, but did not adequately portray my mother as a three-dimensional human being with free will and an ability to make choices, both good and bad. (Consider: the Ex-Lax Hot Chocolate, a box of sugar in the gas tank, the dog-shit burrito). Of course I could not have articulated any of this at the time, though I am certain that this is how I felt.

Anyway, after I said that initial sentence, My dad is beating up my mom, the cop would say, “Stay on the line with me, okay?” and I’d say, “Um. I really can’t.” The cop, then, so as not reveal alarm, would say, “Listen, if you need to hang up, go right ahead and do that. We’re on our way.” Minutes later, as promised, two barrel-chested police officers would appear on our front porch, rapping on the front door with their billy clubs, their gorgeous badges gleaming in the sunlight. Police Officers! Open Up! One time my mother looked at me and sighed, disappointed that I’d called the police. She told me that, actually, I should have called my father’s parents instead of the police. Her logic: at least his parents would feign disgust. They’d judge him and use words like shame and disgrace. Es la verguenza! The police, she reasoned, would only further infuriate my father. He’d get thrown into a jail cell; he’d call his brother Eddie; Eddie would bail him out; he’d return home, madder than ever. Also, my mother hated having to give a report to the police and then having to decide whether or not to press charges. She’d always be wearing nothing but a thin, clingy nightgown, no time to grab a robe much less put on some lipstick or drag a brush through the hair. Plus, they’d want to examine her bare arms, her neck. Plus, our neighbors on Country Club Drive seemed to enjoy standing on the sidewalk and staring at the police car and our house—children and adults alike. In our all-white neighborhood, they would gather with crossed arms, squinting beyond the sun’s glare toward our front door, acting like they were one-hundred-percent entitled to stare, as if staring at my house and whatever emerged from it was no different than staring at elephants in the zoo. My mother said that they thought we were a bunch of dumb, dirty, low-class Mexicans. But I did not care. I liked the handcuffs, the starched black uniforms, the static of the radios clipped onto the shoulders, and the contrast between the supposed good guys and my father—in his threadbare Hanes t-shirt, polyester pants and work shoes, no socks—who always emerged from our house looking like an escapee from the local mental hospital as he was led to the back of the patrol car.

These police officers—always male—went out of their way to be nice to me. They talked in soft voices and asked for my side of the story. They sat with me on the couch, pens in hand, recording all my words onto little notepads. They said things like, Don’t be afraid to tell the truth. I felt vindicated, then, even if only for a few minutes, knowing someone had listened to me and that someone could hear about the things I’d been seeing for years on the other side of our fat yellow roses and lush lawn.

But my mother was right. What good were those accounts, in the end? My words seemed to have evaporated into thin air. I didn’t know what it meant to press charges or why the police did not lock up my father for more than a few hours at a time. Soon I learned that calling the police was useless, even more dangerous. And if my father always came right back home, faster than zombies in Dawn of the Dead, what was the point?

One day I called up the other set of grandparents—my mother’s parents—and minutes later, Grandpa screeched up in his rattling, beat-up Ford pick-up truck. When my father opened the front door, Grandpa pointed his hunting rifle directly at my father’s face. Grandpa’s hands were shaking, and he said, “Son of a bitch.” I stood there, frozen in place and dumb as a potted plant, half-hoping Grandpa would pull the trigger, fascinated by my father’s rapt attention.

Not long after that, I pulled out the drawers of my father’s built-in dresser, climbed up them like a ladder, and reached around in the highest cabinet until I felt cool gunmetal— his .22 pistol. I pulled it out and, balancing on the edge of a drawer, pointed the gun at my father’s back as he held my mother by the hair. “Hey,” I said, wanting to give him fair warning. (Never shoot a man in the back—I knew that much). When he turned around, he did a double take. His face went suddenly slack and pale, but he chuckled nervously and I, too, had earned his rapt attention, maybe for the first (and last) time in my life. Just like in all those Clint Eastwood and Charles Bronson movies that he had taken me to see (although I would have much preferred The Apple Dumpling Gang or The Shaggy D.A. ), I said, “One move and I’ll blow your goddamned head off.” He said, “Ha ha, Angie, that’s funny. Now put that thing down. That’s not a toy. That thing’s for real.”

“No shit,” I said, steady on the aim, just like I’d learned from Charles Bronson, right between the eyes. I felt that I’d been pushed to the edge of a cliff—I felt crazy from the aforementioned ebb and flow, like I wanted to live on dry land, no ebb, no flow. I did not really want to kill him. I just needed him, at that moment, to be erased from my life. From our lives. “Okay, not funny,” he said. “Quit fooling around, now. I’m serious.”

My finger grazed the trigger—a lovely, terrifying pulse—no tension, just a fraction-of-an-inch of freefall and then slight pressure—the threshold between one existence and another. Will it be curtain number one or curtain number two? Of course I did not know a thing about guns, whether they needed to be cocked or whether they came with some safety latch, but the expression on my father’s face suggested that I was, indeed, on the right track. As I balanced on the edge of the drawer between two possibilities—my eyes on my father, my finger poised on the trigger—my mother appeared white and glowing in my peripheral vision. She glided closer, soft as a ghost, and said somewhere near my left ear in a low, gentle voice that made me look at her, for the certainty and conviction that I heard her words had startled me from my gun-slinging trance: “Listen to me,” she said. “Do NOT ruin your life. He’s not worth it. They’ll take you away to Sybil Brand and I’ll never see you again.”

I knew Sybil Brand, alright. Sybil Brand, a maximum security prison for women, housed criminals like Susan Atkins, member of the Manson Family. We’d always driven by that massive hilltop structure en route to my paternal grandparents’ house. Sometimes we’d see sixty-mile-per-hour flashes of orange-jumpsuit-clad women outside in the yard, many of them leaning against a barbed-wire fence, probably bragging about their crimes. I’d always feared that one day my mother would end up there, the syntactical structure being, She shot him, rather than He shot her—“she” being the actor—“he” being the acted upon. I was surprised, then, by my mother’s warning, for I had not thought that I could end up in prison, too. Children must assume that because they are children, adults will protect them no matter what, even if they have killed someone. And perhaps I hadn’t thought that this sort of killing was actually a crime; I had just thought of shooting my father as a practical solution to an ongoing problem. So in deciding whether or not to pull the trigger, I suddenly glimpsed myself—clear as a photograph—youngest girl in Sybil Brand—Eleven-Year-Old Girl Shoots Father. How quickly the brain weighs the pros and cons. Pros: he’s gone. Cons: an explosion, blood splatter, sirens, police, child psychologists, a trial, traumatized siblings, a distraught mother. I’m led from the house in handcuffs, head bowed, neighbors watching. Like in those dreams when one person is at the same time another person, I would become my father, he would become me.

I remember how he stood there reaching for the gun and breathing heavily, his bloodshot eyes darting back and forth, his life one of take, take, take, a person as mysterious to me as any stranger. I knew then that I did not want his life—it would have to end some other way.

“ I wrote this essay quite suddenly one day when I was deeply entrenched in writing a completely different essay. I started thinking about how pointing a gun at someone (when you intend to shoot) is like being pushed to the edge of a cliff. It belongs in the category of those rare moments when we feel fully lucid--absolutely engaged--our hearts pounding with recognition that our next move may transform us and catapult us into a completely new reality. Writing about this event, in some weird way, helped me to understand that this moment was really about a kid finding her voice and, for the first time, understanding the power of free will. ”