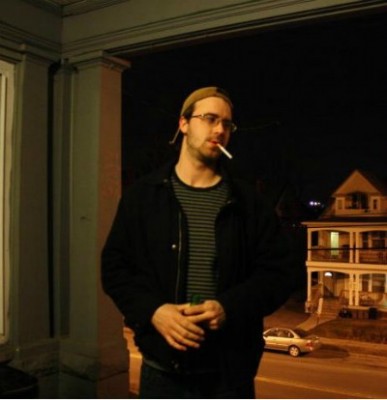 Andrew Purcell lives and works in Upstate New York, where he enjoys hiking, fishing, and working with Bruce Smith to complete his MFA thesis at Syracuse University. His work has appeared in Forge, among other publications. He misses Baltimore’s Inner Harbor, one of his earliest inspirations for writing, and he deeply admires the work of Bruce Smith, Tony Hoagland, Patrick Lawler, and Caki Wilkinson, a graduate of the Johns Hopkins MFA program.

“Under tactical conditions, the operational element
is completely rigged at the point of no return.”
U.S. Army Field Manual 31-19

My father spent a considerable period of his youth
falling from the sky.

He set fire to objects, a behavior he passed on,
downward. He has said to me "I didn't start the fire."
But that may have been rhetorical. Lyrical.

Some people build houses and some people burn them down.
Some people build the objects that burn down the houses. Those people are
in between, maybe, or at a right angle, their axis begetting
a spatial dimension through which to drop like an iron bomb.

The longer one falls, the faster, to a point. That is, one falls to a point,
as my father fell.

On average, men spend far less time falling than my father.
Our understandings of the verb to plummet are only superficially similar.

My mother waited, gravid, while he dove through the night's long dive, literally
a falling man, primed as he was, the fields alight with flares, a streaking mass,
the angel’s plunge, an altitude’s perishing, the fire, the dagger, the halo.

In the woods we subsist on canned hash and pinto beans,
corn mash whiskey and what we can recollect of Tom Waits.
The drinks lay us down and the cold wakes us up.
We fill our canteens at a creek, wash our cooking pot with sand and silt.
Our clothes stink sour.
Rationed portions, the things that live in the water,
drinking on empty stomachs, our notebook of notes,
songs riddled with hate about years we have wasted
on people and places—whatever it is,
we are losing weight.

Evenings are paranoia in the red pines:
a massacre, a malfeasance, a moribundity,
no, a murder of crows.
Alone for miles, we are thinking about women in cities,
in Liverpool, in Florence, in Chiang Mai;
we are thinking about women in Portland, in Lafayette.
He says: nothing comes of it.
He says: miasma and your asthma.
He says: we're the teeming candycorn that fills the great glass pumpkin.

Our stomachs shrink.
Breakfast is seven greasy cashews and the saliva that wells at the taste of salt,
and for three weeks we are happy like this, stewing in ourselves,
relishing our vague turpitude, resenting the world
that is not the woods.
« Previous