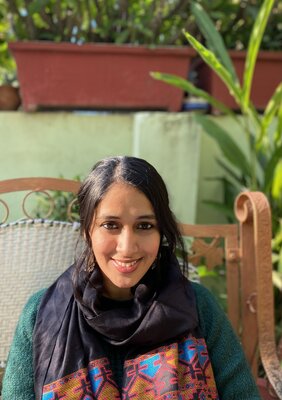 Iqra Khan is a bilingual poet, activist, and accidental law graduate from India. Her poems have appeared in The Bombay Review and University of Warwick’s journal, Feminist Dissent. Her articles have appeared in Scroll and The Wire. Her writing is centred around cultural nostalgia, sexual autonomy, and the fight for socio-economic justice for marginalised communities in her country.

A spider on my window is digging up the moon. My father won’t let us kill a single spider. My father, a man who won’t even kill a spider because the prophet Mohammad owes them a debt. I’m certain that his Mohammad owes him a debt for letting his saviours strut like queens in our home. In his name, even spiders strut like queens in our homes. Exiled from all countries, my people want their own. Exile is the country my people call their own— like spiders on a window, we’re digging up the moon.

“ Hijrah, or Hegira, means ‘migration’ in Arabic. It refers particularly to the migration of Mohammad and his followers from Mecca to Medina, in order to escape persecution and massacre. It is believed that it was a spider web formed at God’s command at the entrance to the cave in which the prophet was hiding that saved him from the Meccans who came looking for him. This poem is about those of us who come from everywhere, and therefore belong nowhere. ”