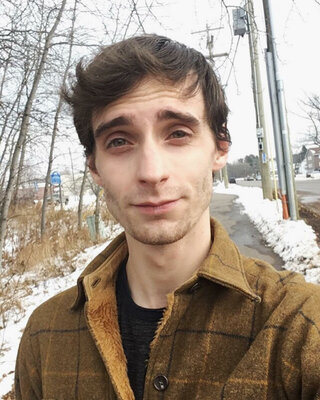 Brandon Hansen is a Truman Capote Scholar at the University of Montana’s MFA program. His work has appeared or is forthcoming in LIT Magazine, Puerto Del Sol, Cape Rock Poetry, and a few other places. He is from a village in northern Wisconsin named Long Lake, and if you are wondering, the lake is, indeed, long. For more writing from Brandon, check out his website: https://brandonhansenwriting.wordpress.com/

I watched a rainbow trout take the minnow in its mouth like a dog does a stick. I saw this in real time on the screen of my dad’s underwater camera, which we lovingly called “the fish camera,” as the lens was affixed to a faded bluegill replica that swayed in the undercurrent. I pulled my phone out of my pocket to take a picture of the fish camera’s grainy, black and white screen, to capture the moment before I captured the fish. On its way out, the phone clipped my bulky snow pants. It slipped through my gloved hands. It slid on the ice-slicked floor of the shack, and, with the slightest plop, dove into the drilled hole. Speechless, I watched on the fish camera as the phone, still glowing, struck Lost Lake’s bottom, spooked the trout, and kicked up a cloud of silt.

Things happen in life that you can only shrug at. My dad first told me this when he found me, maybe twelve years old, leaning like a limp fish against the basswood tree in the backyard, my heart freshly broken by a girl on the school bus. In that phoneless moment on the ice, I stared in disbelief at the screen of the fish camera. In its projected image I could see that moment with my dad again: the mottled shade of the basswood as the static in the screen, the crouching figure of my dad as the fishing line, the limp fish of me as the munched-up minnow, which hung by a fleshy thread from the hook.

But that had been years ago, that pep talk under the tree. And as a junior in college, I had seen a lot happen since then. I had seen enough happen that I knew to rise to my feet and hike off the lake. The excess heat in my face flushed to my heart as I trudged through the knee-deep snow. When my car sputtered to life in the frozen parking lot, I thought of those things I had seen: my dad snap his leg in half, lose his job for months, and fix boat motors in the frosted yard with his braced leg kicked up on a five gallon bucket to keep the bills paid. I’d seen him cut a limb from the basswood tree and split it to size when a polar vortex ran us out of firewood and the cold turned the inside of our windows to sheets of ice. I’d seen him punch a hole through the slush in the lake across the street and scoop the freezing water into a bucket so we could force-flush our toilet when winter storms toppled power lines. And he never once shrugged.

As my car slid left and right on the way home, I thought of a time when Dad had picked me up from high school after work, and we slid home much the same way. He had spent that day outside in the sleet, winterizing some vacationer’s fifty-thousand-dollar speedboat. During that drive, he told me he hoped I wouldn’t have to work like he did. He told me to go to college, to get a job where I used my brain instead of my body, to do something where I had the choice to stay inside when it was cold.

And when I got to the house, panting, and told him I’d dropped my phone into Lost Lake, at first he probably wanted to tell me to shrug it off, that it’s only a thing. But maybe from the look on my face he knew that on the phone were records of texts from friends in college, pictures of me with all the people he had wanted me to meet, digital pictures of Polaroids of him and me with fish in our hands that I would stare at when missing home, records of phone calls to him and my mom and my brothers and with the people I grew to love from school, thousands of notes for stupid stories I wanted to write, thoughts I thought were profound, drafts of messages I was too shy to send to girls I liked, to new friends, to professors who scared me. On that phone was the record of the first person ever in his family to go to college—to strike out into a world where there might be the luxury of shrugging, someday. Maybe he felt that. Maybe he sympathized because when he was my age, he wouldn’t have had the sense to back up his files either, or just enjoy a moment without photographing it, and that’s why he said, “Wake up early. We’ll head out there tomorrow.”

We slid the ice shack off the hole and were careful to keep my jigging rod in place, as I had left the bare hook and line dangling there overnight to serve as a near-exact marker of where the phone would be. Around the original hole, I drilled three more holes, then punched out the interstitial ice with the maul. While I did this, Dad tinkered with something behind me. Between the blows of the maul splashing the freezing water, I heard duct tape ripping, metal clinking. When I finished cutting the larger hole, I turned to see Dad brandishing his invention: the 20-foot-aluminum pole that was our entire roof rake, tipped with an ice ladle bound to the metal with duct tape.

I manned the fish camera, orienting it to capture a birds-eye view of the lake’s bottom. After minutes of squinting at the image, I saw it. The rectangle of my phone, an impression in the silt. My dad, on the other end of the widened hole, started to feed the roof-rake-ladle into the water.

Dad shifted the ladle on the lake’s floor. I directed him through the camera, which was powered now by one of dad’s old truck batteries. The slightest slip kicked up silt, and we’d wait twenty freezing minutes for it to settle while we prayed the phone wouldn’t be buried. The ice turned to slush beneath our knees.

The few, precious bright hours we had in winter days like that one passed quickly. The image on the fish camera grew staticky—the truck battery wouldn’t hold out much longer. As much as the phone meant to me, I started to accept that I might never see it again, that all this was ridiculous. And besides, if I had no other choice, I could be content with the effort. The thought of all those memories locked away in a little box deep beneath Lost Lake’s surface wasn’t so bad. Knowing I would float over it in my canoe in the summer, that little fish would poke at it curiously, was something I could accept, now that we’d tried.

But that is not how my father operates. When I asked for his help, he could have told me to go online and click the “Buy Now” button on a new phone—but he knew that wasn’t an option for me, because it was never an option for him. All my life, my dad might have told me it’s okay to shrug things off and move on, but in everything he’s ever done, he’s shown me that that’s not the only option.

And never was that clearer to me than it was in the orange, fading light of that day, when my dad slowly, carefully, pulled the 20-foot roof-rake-ladle from the water, and I was able to reach through that hole in the ice, up to my shoulder, and forget the cold, and forget everything except grabbing my phone from the caress of the ladle.

We laughed until it hurt, there on Lost Lake. With relief, maybe, or for the sheer nonsense of it all—but we laughed, loud enough, I’m sure, for the roaming rainbow trout beneath us to hear. And I laughed again, too, when after a couple of days in a bowl of rice kept warm by the fireplace, and after sitting in front of my car’s heat vent on the ride back to college with me, the phone came back to life. And, as we all do when we’re scooped from the cold, dark depths, and are loved, and are warmed—it worked just fine.

“ I’ve been writing about the different lakes in my life since I learned to hold a pencil. Because I think real life is as fascinating as it gets, especially when we’re out on the water, I’m working on a creative nonfiction collection about these lakes. This piece came out of that effort, as well as the effort to reach back in my mind and recall one of those many moments growing up where my father was a hero. ”