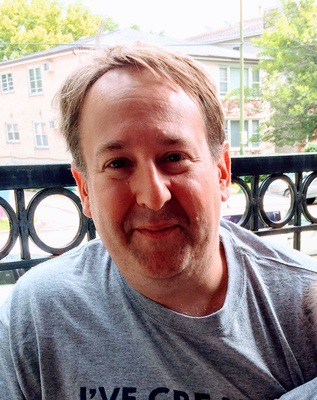 Ian Baaske’s work has appeared in Bellevue Literary Review, Warship, and The Puritan’s Town Crier. His screenplay, “Daisy,” was a semifinalist in Zoetrope’s Screenplay Competition last year. He lives near Chicago with his family and writes at night when everyone else is asleep. More info at tantabus.org.

When their subway train took a wrong turn during the morning commute, the passengers laughed at first. “I didn’t even know there were turns,” said some of them after the operator’s crackling announcement. They then looked back down at their phones and tablets, and those reading books tried again to find their places.

But as the minutes ticked away and still the train rocketed through the black tunnel, a disquiet fell across the cars. Phone conversations ended as cell service disappeared. Here and there, individual voices could be heard shouting something like, “This is ridiculous!” Or saying in softer, bewildered tones, “Where can we possibly be going?” No one would respond, and their words hung in the air like wispy smoke.

After twenty-two minutes, confusingly, the operator announced their imminent arrival at a station called Morris. No such station existed in their city, and there was no nearby city connected by subway. In fact, nowhere else was close enough to reach in such an amount of time.

The station looked much like any other, but the signs reading “Morris” looked dirty and old and were black with white letters—matching no known subway line. The platform was empty.

There was a great deal of noise and confusion when the doors opened. Frightened to be on board any longer, a handful of passengers quickly disembarked before the doors slid shut again, and the train chugged off. Those remaining on board buzzed the operator, who politely assured them they’d be returning to the scheduled line shortly but offered no explanation otherwise. Direct questions were ignored.

In another nineteen minutes, the doors opened at the scheduled stop, and the passengers clambered off, agitated and disoriented. While some excitedly explained their situations to the bewildered workers in the station, most just shuffled up the stairs and out onto the street, resuming their lives, where a soft gray rain had begun to fall.

None of them were ever to find any public account of the incident. Nor did they ever know what had become of those who’d left the train at Morris Station. And because they had no way of knowing who those people were, there was no way to inquire after them. All just strangers who vanished behind sliding doors, thought of briefly now and then with a shudder.

“ For a long time, I took the Blue Line in Chicago to work, which is sometimes an elevated train and sometimes a subway. I liked to read but when I couldn't for whatever reason, I had a series of recurring daydreams I'd think through. One of them was about the train getting lost, which of course shouldn't be possible. It never upset me particularly. ”