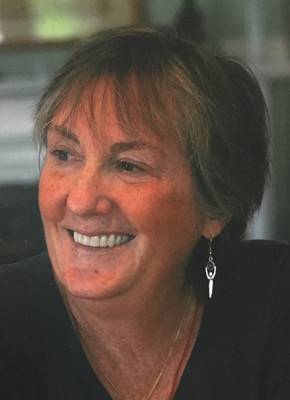 Kathryn Brown is a retired captain with the San Francisco Police Department. She is currently working on a collection of short stories based on her experiences while working in high crime areas of the city, particularly the Tenderloin. Her intention is to take the reader beyond the surface experience of interactions between police and the public, to provide a deeper understanding of the psychological and perhaps spiritual impact of those encounters. Her short story “Misty” was published by Two Hawks Quarterly, whose editors described it as “both compelling and unique.” This is her first appearance in The Baltimore Review.

Slipping out of the bright sun my patrol car creeps slowly towards the end of the alley, where I see the faces of three scruffy looking people seeking refuge on a filthy mattress against the far wall. A sliver of open air running between two tall buildings, the alley is steeped in shadow and a patternless collection of garbage. Radio signals are blocked by the height of the buildings in alleys like this. If I need help I’ll be on my own.

What am I doing? Rolling down this alley filled with a simmering desperation to prove myself.

I am not who I was. A strange fear and shame sit high on my shoulders waiting to strangle any thoughts of value or bravery. It has been so easy to lose myself that I have begun to wonder what there was of me to lose.

A few months ago I had responded to a simple complaint about a car blocking someone’s driveway. It was a bogus complaint so that when I drove up to the address I found no car anywhere near the driveway. That’s when a sixteen-year-old with a .45 caliber revolver walked up behind my patrol car and blasted through my rear windshield. For many moments it was all thunderous sound and vibration and the smell of burning fabric as the explosions kept coming and the headrest next to my ear tore open. He was determined, this young gangster who wanted to be a big shot by killing a cop, and the explosive reverberations continued as nickel-sized holes opened up on the dashboard in front of me and a chunk of my steering wheel blew off. Bent over for cover amid the smell of gunpowder and flying glass, I pressed hard on the gas pedal and wondered if I might die. I sped down the street, the gunman running after me, shooting round after round, the roar of the blasts swirling around my ears and pinging off of car parts, until finally I was out of range and he was out of bullets.

Afterward I thought my blood would boil over I was so charged with anger and confusion. Wildness filled me so that when I stumbled out of my car fellow cops who ran to me in concern found me shouting at them to search the shadows for the gunman rather than pick shards of glass from my hair.

I went home and poured myself a shot of icy vodka to roll over the grit at the back of my throat. Sitting at the kitchen table I closed my eyes, my head dropping from exhaustion. Minutes later I found myself waking violently, my heart and lungs drumming as I imagined the gunman’s bullet entering my back, breaking me into pieces. I held my face in my hands and felt a deep shudder rumble through my body.

I have come to know an intimate, brutal fear and it has caused me to be solitary and lost. Now I find myself suddenly slow to respond to calls, hesitant to work alone, shy with hardened criminals. Repulsed by my timidity, this weakness, I have developed deep roots of darkness and shame that cause me to believe that it would have been better if I had been killed that night.

For weeks I have hung motionless over the pieces that used to be me, wanting to put myself back together the way I once was, when I saw everything as possible. I find myself approaching every danger as an opportunity to prove myself, every peril as a duel between my soul and the fear that causes my hands to tremble. But nothing fits as it had before and as I drive down the alley I know that I am raw and lost and falling apart all over again, looking to be saved in the faces of those whose suffering might outweigh my own.

At the end of the alley Sammy is lying on his side across the lap of a woman I know as Pearl. She sits on a blue plastic milk crate and concentrates on the flesh of his neck, her long full hair falling over his pale face as if she were Mary tending to the suffering Jesus. She holds a loaded needle of heroin and searches the side of his neck for a cooperative vein. Through my eyes I see the intimacy of their movements. I drive up and she drops the needle, pushing him off of her and scrambling backwards onto the mattress where the others sit with indifferent eyes. Sammy sits on the ground, looking as if his heart has just been broken.

The sight of me causes them to hide whatever they’re doing and toss their dope. An old guy in a poncho puts his paper bag covered beer behind him. He’s crouched down and looks up at me, his rheumy eyes watery and unfocused. I walk to where he’s sitting.

“Pour out your beer, pal.” I order, hating the tone of my voice.

There is an intolerable ugliness in my bullying so that I look down and let the shame wash over me unseen. The old guy tilts the can and watches the liquid gold of his Colt 45 foam up on the street and soak into the side of the stained mattress. Sammy sits up, his hungry eyes racing to the full needle thrown to the ground.

Why am I here? What good can possibly come of this?

Sammy is skinny and sick.

“Sammy, you’ve got a warrant.”

The warrant is for a small, meaningless transgression.

“Shit, please don’t take me in.” His eyes flick back to the full needle.

My purpose is fluid and lost, flowing out of my body so that I stand unsure.

He stands. We stare at each other, the despair in our eyes reaching out and swirling together so that it is the same.

I reach for him and feel his muscles tighten. I push him and he pushes me back and we struggle in a slow motion dance of demons and despair. I can hardly hold on, my strength leaving me, replaced by the fear of knowing that I have to let go of the old. Not much of a fight, just my pushing him against my patrol car and him resisting my effort to get his hands behind his back and me trying to believe that this is worthwhile and him just trying to get his next fix and me knowing this isn’t necessary but fighting anyway because I have to feel strong and tough again and he needs his fix and our desperation comes together and wraps itself around this sad mix of human despair. Here in this alley, this pathetic push and pull.

He has broken the rules, he has a warrant, but the rules have lost their meaning, and he asks to fix before I bring him in and that is against the rules too. The rules that no longer mean anything because the only thing that matters is that we are here together working through this human experience, both of us filled with a despair that has led us to each other. Here, together, wrestling through the dark haunts of our lives, both trying to survive in a place that makes no sense.

What am I doing? What have I done?

Now he is bent over the hood of my car, face down while I put handcuffs on him and he is crying with the agony of knowing he will be locked away from his bliss and I want to scream and beg him to forgive me.

They all stand now. Angry and resentful, they despise me.

Pearl comes closer when I ask, looking around and tucking her hair behind one ear. Her eyes are dark, accusing. She looks down at the loaded needle at her feet unable to grasp what I have just asked.

She is so tender with him and I watch in a trance as she runs her fingers over his arms and hands looking for the vein that will help end his anguish.

And then it is done.

Nothing makes sense anymore. I put Sammy into the backseat of my patrol car and suddenly I feel like I want to cry because I have lost myself in his pleading eyes.

Pearl rests her hand on my shoulder and I flinch but don’t pull away. I feel myself no longer brave but somehow forgiven.

“ This happened at a time in my career when fear forced me to see things differently. The rigid cop who believed in the world of black and white police work was suddenly shaken awake and I saw my own vulnerability reflected in the eyes of the people I came in contact with. I had an urgent need to understand who they were, where they came from. I began to listen closely, to offer a few kind words. It was effortless. ”