Shedding the Carapace of Capital-M Meaning

I began reading Piotr Gwiazda's second book of poems, Messages, just out from Pond Road Press, with the suspicion that parts of it would be difficult. Maybe it was the abstract cover design, or maybe the fact that Gwiazda teaches courses in modern and contemporary poetry at the University of Maryland. Now that I’ve read the book a few times, some of it does remain difficult for me. It’s important as an ethical matter to state this outright—here I am reviewing this book and I don’t quite get some of it—or it took me a while to get it—because I hate the sort of charade where sophisticated people pretend to understand a thing in order to make other, less sophisticated people feel inadequate. I want to quickly add that where I do understand what Gwiazda is doing I like it very much. And where I don’t understand it, well, I can interrogate myself about what I mean exactly by understanding and not understanding. So there’s that.

If Gwiazda had not called the book Messages (some of his thinking about this title is explained in the transcript of a fine interview with his publisher at the end), he might have called it Ether. Gwiazda borrows the word ether from Joe Milutis and uses a rather dense passage from Milutis’s work as an epigraph. I hated this epigraph at first because it seemed to typify everything I’ve come to find repellent about postmodern academic prose. I mean, what do you do with stuff like “…the material world is a flux in which we maintain active dialogue with the Other, which, for better or for worse, determines and derails representation.”  I mean, really. As I sit back with Gwiazda’s book, however, my resistance starts to fade. That old pack of Lit Crit cigarettes must be around here somewhere. I light one up and answer suavely, “But of course.”

Ether, in Milutis (and having never read Milutis before I can say this with confidence), and by extension in Gwiazda, serves as a suggestive term for the virtual element—language, images, delusions, fictions—in which the contemporary human swims. It’s not totally Other, as Milutis says, but it has “a little otherness.”  I suppose one can say ether (like in the Ethernet, get it?) rather than the virtual element or the world of our representations because bending an old word to a new meaning creates an intellectual frisson at the possibility of the new, like a virtual territory opened up for mental colonization. Technical or novel language like this can dress up old problems in fresh garb so we can stop forgetting that they’re there. And then again, our fictions and representations have thickened exponentially in recent years with the rise of the Internet and like technologies, and some would say they’ve also become an increasingly effective means of ideological control; so a new word that suggests this new space or layer of experience might be called for.

When you pull this ether out of the world for examination, it naturally pulls along the delivery mechanisms and contexts that are attached to it. Therefore, privileged settings in Gwiazda include computer workstations, television shows, and rows of books. Many rows of books. (This seems like a good moment to humbly report that Gwiazda has a very broad reach for historical and literary allusion; certainly broader than anything I could manage, which makes me jealous.) The poems delight in mixing different registers: References to Wallace Stevens, Christopher Marlowe, and Wittgenstein rub shoulders with the Discovery Channel special, Life After People. The first poem in the book declares, “anything, anything / can be put into a poem,” and the rest of the book shows us that Gwiazda is serious. In another poem, we are introduced to Dante, still alive and bored, on a flight from somewhere to somewhere (the poem won’t say), his literate musings interrupted by questions from an attendant.

As in the idea of Dante on an airplane, Gwiazda’s approach entails unsettling juxtapositions  (high art and text messages have equal value and so both claim rights to shelf space) that produce moments of exquisite comedy. A good gateway poem to the collection, “Aardvark, Fat,” is so clear and humorous I’m tempted to read it to my children (I think I will):

down the lamp, scratched
the computer screen
with grotesque claws…

At the end of the poem, we learn that this incredibly visceral vision, so real that it damages some valuable equipment, has emerged from “page 1 of Webster’s Unabridged Dictionary.”  In reading the poem, we feel that we’re incredibly close to the real Aardvark, or the writer is. The twist at the end reveals the aardvark to have been some kind of hallucination, or perhaps a demonstration of writing’s capacity to create seductive illusions. What’s more, the reference to “page 1” of the dictionary suggests that the appearance of the aardvark is accidental. The only reason it’s been brought to the writer’s attention is that the unusual spelling of “aardvark” puts it among the first entries under “A.”  Its appearance is a sudden eruption of the imagination that has occurred in the midst of and derailed an unrelated project, such as reading the dictionary cover to cover.

Because this is meant to be a review and not a series of explications, I’ll hold back on discussion of other poems except to indicate that they can be cerebral, in the best sense, and that they richly repay careful reading.  Among the highlights, the poem “Ether” that opens the book, seems to work as an Ars Poetica, although the playfulness and the many disruptions in the poem (at one point Gwiazda seems to be channeling Wallace Stevens, who is a hovering presence throughout the book) make it hard to assess where he’s being serious and where he’s being ironic.

The poet is a hacker
(is art information?),
a spoiler of the tyrant’s feast,
a disturber of the public peace,
a traveler on the red-eye,
an assassin in the boardroom.

The many things that the poet can be, in other words, start to seem like so many masks that the speaker tries on for size. Similarly, the short poem "Scenic Décor," describing a tree in a storm, tries on different theories of metaphor, moving from the literal to the high romantic to some kind of alien post-romantic space where the familiar metaphoric leap seems increasingly preposterous:

…this tree no longer recognizes itself
In the mirror of our expectations:

With a glass eye, now a collapsing star

As one might guess in these examples, Gwiazda is a master at intentionally striking the wrong note or making a preposterous gesture for humorous effect. The result is a voice that is both learned and humble—or a spirit that, like a hermit crab, is constantly slipping out of the carapace of capital-M Meaning. He looks askance at the various Things We Ought to Be Serious About—love, literature, history—whereas other poets might be more likely to leap into the saddle of each enthusiasm and ride it to the point of exhaustion; I know that’s what I usually do, so I’m the first to admire Gwiazda’s restraint. The multisection poem “Time” that occupies the second section of the book exemplifies this aspect of Gwiazda’s work. The title, I think, alludes to the idea of a consciousness that registers only the quality of passing time, trying to avoid turning it into a story, a project, or a role that others might impose or that it might impose on others:

Is this what Eliot meant
by “impersonality”?
I don’t know what I’m feeling

and so reserve comment.
My life devoted to beauty,
vissi d’arte, and so on and so forth…

But I won’t lead you out of confusion;
I won’t comfort you
as you follow your leaders

and their somnambulist leaders.

Gwiazda’s language in this poem and many others is limpid and studiedly casual. Possible poses, projects, gestures present themselves finally as traps to evade. 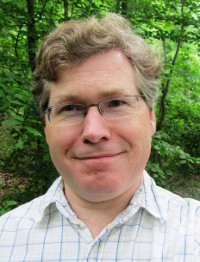 This is not to say that Gwiazda’s poetry thinks it can escape its complicity with the violence and exploitation that ultimately run (and ruin) this world. The book does not retreat into a cloistered space, which much American poetry is said to do (the last section in the book is particularly rich in poems that have an overtly political dimension). Instead, it manages to inhabit the tension between the attitudes and narratives that are available to today’s human, the need to explore them as possible escapes, to experience brief moments of belief in them, while simultaneously standing apart. This is a strength of the work even if it’s initially disorienting. It makes the poems in this collection shine with a kind of helpless comedy and sharpness.